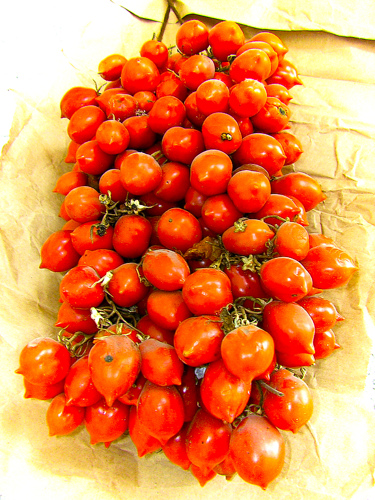 The vesuvian area, a land of millenary traditions is rich of typical and unique products, due to the characteristic fertility of the ground, located at the slopes of the Vesuvio. Consequently it is thanks to the very fertility of the Vesuvio that we find famous grapes in this area, often quoted also by many Latin writers, like Sallustio and Plinio, who wrote how the Vesuvio was already well-known even during the Roman epoch, because of its wines. The Vesuvio, a very stately place, was almost entirely covered with vineyards, and with scattered rustic houses arranged along the mountain slopes, and appointed to the grapevine cultivation, and for the production of wine. Still at present in 15 towns belonging to this famous area, at the slopes of the volcano, ancient grapes are still cultivated, such as: the Falanghina of the Vesuvio, the Coda di Volpe, vulgarly called Caprettone (big kidskin), and the Piedirosso of the Vesuvio, from where the famous wine Lacryma Christi derives, a wine with a pleasant winy scent, with a dry and aromatic taste.

The writer Curzio Malaparte praised this wine in his novel “the skin”, where he invites people to drink this holy and ancient wine, with a thin and delicate strength, vanishing in sweet aromas of wild grasses, a wine with the mysterious colour of infernal fire, the taste of lava, of lapillus and of the ash that buried Ercolano and Pompei. This wine-gastronomic itinerary starts with the celebration of this historic wine, and the first stop is definitely going to be Portici, a well-known royal centre, where wine lovers cannot miss a stop at the wine cellar la Scala, boasting very ancient wine traditions. After a few kilometres we suggest you to visit the agricultural firm of Ametrano, in Torre Annunziata, where a very praised and rare wine is produced. The tour continues towards Trecase, a small country situated between the sea and the volcano, a country that because of its location and wine tradition, it is in an ideal area. In Trecase we suggest you to visit Villino Rea, where wines are exclusively produced with grapes collected inside the firm founder’s vineyards.

A few minutes from Trecase, there is Boscotrecase, an ancient hunting property, whose owner was King Carlo of Angiò. The property was later on given by Queen Sancia, the king’s wife, to three religious houses in Naples, this is why the name Boscotrecase. The town is located at the slopes of the Vesuvio, inside the Natural Park, in the famous archaeological area, surrounded by the ancient cities of Pompei, Oplontis, Stabia and Ercolano, very near the sea, and located in front of the Sorrento peninsula and of the islands of Capri and Ischia. In Boscotrecase it is possible to taste wines at Sorrentino wine house, a firm which has been manufacturing vesuvian wines for more than a century. From Boscotrecase let’s move to Terzigno, where it is possible to visit Villa Dora, by appointment, a villa having more than 13 hectares of ground, and where besides the production of the famous Lacryma Christi, you can also taste a good extra virgin olive oil, a very particular oil and with a very limited circulation.

The tour continues to Ottaviano, just 20 kilometres from Naples and 12 from Pompei, where we suggest you to have a stop at Saviano 1760 wine house, this date refers to its birth, documented by the remains of an ancient “torculario”, with the following central writing “A.D. 1760”, as well as from a family journal, certifying the wine house belonged to this family since 1501. The last stop of this wine tour, is in San Sebastiano al Vesuvio, at de Falco wine house, always opened to visits (except during August and October), where the wine manufacturing still complies with the most ancient traditions.

After this wine tour, let’s then talk about another famous tradition, linked to Somma Vesuviana. We are talking about the trading, the transformation, and the use of dried cod fish. Even if dried cod fish is not a local product, has by now found in this area its favourite environment.

Actually it is from 1600 that cod fish preserved under salt and coming from the distant seas of Iceland and Norway, has approached the Vesuvio and Somma, a particularly proper environment for its manufacturing and retail sale, because in this area there was plenty of water, as well as big spaces to prepare this fish. At present dried cod fish in the vesuvian area has become a typical dish that can be tasted and cooked in many different ways, all over the many restaurants of the area. From Somma, it is possible now to move to Sant’Anastasia, a well-known place for apricots production, celebrated on June with a beautiful festival. The cultivation of vesuvian apricots has been acknowledged with the IGP denomination, and all the vesuvian territory is involved with this production, because of the fertility of the soil, which is of volcanic origin, and consequently rich of minerals, and particularly of potassium, famous for its organoleptic influence on fruits, giving icot a very nice taste.

Apricots are present in Campania from ancient times and one of the first evidences of their presence is due to Gian Battista della Porta, a Neapolitan scientist who on 1583 already distinguished two kinds of apricots: the bericocche and the risomele, the most appreciated. Today the vesuvian apricot indication refers to more than seventy different biologic kinds of fruits, all coming from the same area. Let’s then point-out that a very important and famous product of this area, is the Vesuvio pomodorino (little round tomato), a tomato growing on the most impervious soils at the Vesuvio slopes, commonly known as piennolo or spongillo, because of the traditional technique of hanging them together in big clusters, so as to preserve them up to winter.

This pomodorino must not be confused with common little tomatoes, because its red berries have a small and characteristic end, side squaring next to the stem, thick peel, firm and compact pulp and, finally, a delicious and unmistakable sweet-vinegary taste. The merit of this wonderful result is to be given to the Vesuvio and to the sun. The best soils are also the most difficult to reach, they are often located at high altitudes, where lava castings stratified over the centuries are turned into dark, sandy but fertile grounds, rich of potassium and calcium, ideal for this cultivation. And this is why even in areas where the eruption risk is very high, farmers keep on returning on this place, tenacious, with their seeds selected over the years from the most beautiful plants, to produce the special pomodorini very famous all over the world and that are the symbol of Neapolitan people.