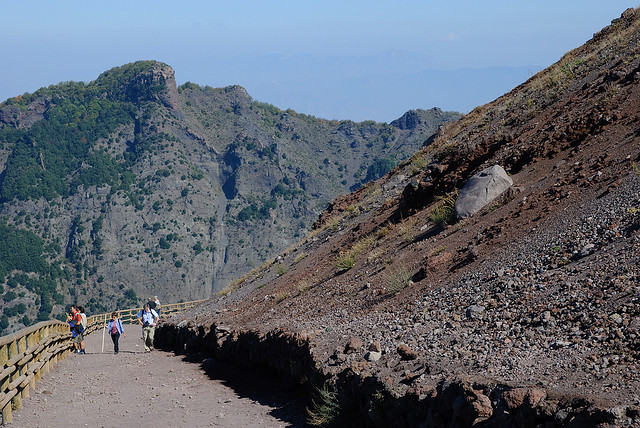 In the vesuvian area you cannot miss a stop at the enchanting Parco Nazionale del Vesuvio (Vesuvian National Park) that with its 10.000 squared mts. is one of the most rich in history and culture. Ever since the park exists, there is a more aware exploitation of the surrounding territory, of its products and of its traditions.

The park offers a series of paths, which will meet the most different needs, according to the duration, difficulty, age and interests. The park is equipped with a system of signs that allow to cross such itineraries without difficulty, so as to appreciate without problems the beauty, the amenity and all the other characteristics of the place. There are 15 total itineraries, 9 of them ready. and prepared to be visited.

Some of them have a high degree of difficulty and, therefore, they can be suggested to the most resourceful people: The Valle dell’Inferno (Departure from Ottaviano), allows to live the volcan grandeur, by observing from the low, both the Monte Somma, and the Vesuvio. Along the Cognoli (Departure from Ottaviano), tourists will be given the chance to discover very evocative places, like the lava formation also called “a corda” (ropy lava), carved by a deep crack where there are many kinds of ferns. Another itinerary is the one leading up on the Monte Somma top (Departure from Ercolano), la Strada del Matrone (Departure from Trecase), wich takes this name from the brothers who built the path. This is the most panoramic path of the park, with the upturn to the Gran Cono of the Vesuvio.

Less binding paths are the following:

the Riserva del Tirone (Departure from Herculaneum), where along its level paths, where closed and shady points in the wood alternate, open points and in wood both dominated by the view of the Vesuvio, really lead to Riserva Forestale Tirone Alto Vesuvio, founded on 1972 to safeguard the crater belt of the Vesuvio, and then the Vallone della Profica (Departure from San Giuseppe Vesuviano), with its typical agricultural landscape. It is possible to admire the oriental side of the Monte Somma with the Cognoli of Ottaviano and Levante and more behind the oriental side of the Vesuvio. It is very interesting because it is good to observe the products of the vesuvian land, like the well-known pomodorini, which will be gathered in the “piennolo”, and fruit trees among which the fig tree, the peach tree, the cherry tree, and the thornbush.

Another path with low difficulty is the Trenino a Cremagliera (Departure from San Sebastiano al Vesuvio). During the way it will be possible to observe, the impressive lava casting of 1872 and of the lava river of 1944 which is here in its terminal line and it has the characteristical aspect of grey grassland for the colonization of the Stereocaulon vesuvianum. The last path easily practicable is the Fiumi di Lava one(Departure from Ercolano), a way to be made in single file, but that allows to walk through a mixed wood with essences like the chestnut tree, the core, the black carpino and the roverella, whose brushwood preserves some specimen of hawthorn, of ivy and of aquiline fern. The path of the Gran Cono (Departure from Ercolano) has a middle difficulty, reachable by walking through a series of particularly panoramic hairpin bends.

The Vesuvius National Park covers a surface area of around 13,500 hec­tares, it includes numerous villages and is one of the World Biosphere Reserves protected by UNESCO.

According to a scientific research, the volcanic component was already active 300,000 years ago, with explosive phases that began around 17,000 years ago (a Bronze Age village, buried by an eruption like that of 79 A.D., has recently been brought to light in Nola). The eruptions of Vesuvius have been so typical as to give rise to the term “Vesuvian phase” in order to indicate violent reawakening caused by magma at a great depth. The mild climate and the extremely fertile ground, despite the lava flows that have followed one another over the centuries, have enabled the evolution of luxuriant characteristic flora that provides a habitat for a few, but significant animal species, with birds that stop here while migrating.

As well as the typical broom, which is the symbol of the park, we should also point out the lichen that colonizes the lava flows because mugwort, curry plants, valerian, pines, locust trees, birch and species of the maquis have an origin there.

It is possible to go on excursions in the Park and on Vesuvius, in order to enjoy the natural envi­ronment and admire unforgetta­ble views.

We recommend ahving time for a visit to the Vesuvius Observatory, the first point for volcanological observation and study in the world and one of the greatest structures of its kind.

It was founded in 1841, and was ini­tially run by one of the most famous volcanologists ever, Giuseppe Mercalli, who gave his name to the Seismic Scale bringing his name. The Observatory is halfway up to the crater and can be visited.