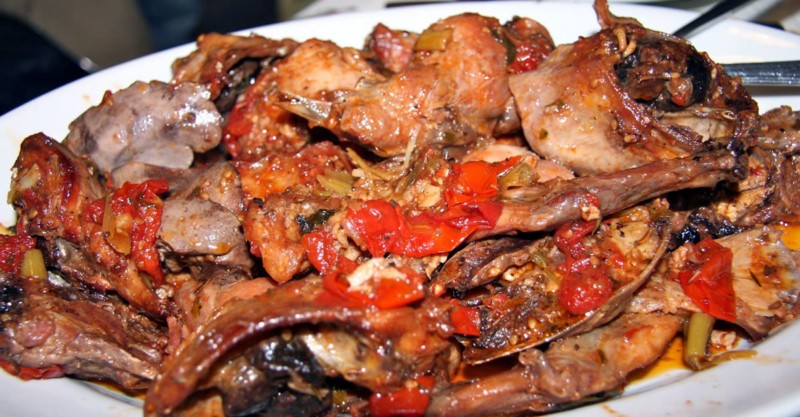 The island gastronomy has very deep roots in the double maritime and country tradition, which also inherited Greek and Roman habits. This area is rich in well – known wines that have been satisfying the most demanding palates from centuries, and where in many “taste temples” old recipes are constantly handed on. Cookery is now more rich in fish dishes, available for all social classes, but years ago it was not the same. In ancient times, the most delicious fishes were a prerogative of rich people of the Neapoletan middle class. On the tables of the less wealthier there were cheaper products, such as fried or dip in eggs anchovies; the anchovies cake, and “la musdea”,a kind of codfish cooked at the acqua pazza, with little tomatoes, garlic, oil and chilli pepper.

In Procida there was the ancient receipe of pesce fuit (escaping fish): bread, hot water, spices, garlic, and just the desire to eat a fish that wasn’t actually in the dish because less wealthier couldn’t actually afford it. There are many recipes to be look-up at, in order to study the island gastronomic traditions. First of all we have the well-known Ischia fish soup, prepared with the most tasty fishes, such as for example the rock-fish, the water-hens, the stuffed tattler, which is a very ancient receipe. The stuff inside is still the same old grannies used to prepare years ago. There are also many tipycal country recipes, as for example the soup with beans and pumpkin, broad beans soup at the old tastes way. Ischian housekeepers used to cook this particular soup, to bring it to their husbands working in the fields – Another recipe is chicken, and rabbit, cooked at the Ischian way, with garlic, tomatoe, white wine, chilli peppers and spices. This recipe is very tasty, and meanwhile cooking those meats in this way, inside a crock saucepan, there is a wonderful smell.

Many Caprese recipes have enchanted the famous actor Totò (who adored linguine at the rock-fish). Other important men as D’Annunzio, Malaparte and the futurists, were all attracted by those smells, impossibile to find anywhere else. How to forget the ancient cianfotta dish, one of the dishes Emperor Tiberio invented together with Serpillo, his famous greengrocer; then the ravioli alia caprese, which became a real gastronomic symbol of the island, thanks to D’Annunzio’s praises. Those raviolis are stuffed with eggs, parmesan, sweet marjoran, and caciotta cheese. In 1909 D’Annunzio called this cheese, the caciottella, describing it with the following words: “candid, tender, humid, this cheese preserves the most fresh milk virginity, underneath its peel”. Let’s not forget about Tettler and aubergine balls. The first ingredient is a shellfish that can be easily found in Capri sea (the famous Curzio Malaparte used to fish tettlers during night fishing), and can be cooked in different ways, but the most delicious way of cooking it, is stuffed with different kind of cheese, everything mixed with the tettler’s heads. It is said that the aubergine balls, have sweetened the Oscar Wilde’s opposed stay in Capri, during the libertine dinners with his friend and poet dandy Jacques Fersen in Villa Lysis. Finally let’s also mention the famous peppers stuffed with bread,capers, olives, cooked by Chaertusian monks.

Let’s now talk about desserts, and the other many delicacies, like lingue di bue (ox tongues), fragrant desserts of light puff pastry, stuffed with custard, or lemon cream. Those ingredients make the little pastry shops in Procida Harbour smell so very good, enticing visitors to taste those pastries. Sant’Angelo, in Ischia, is the most greedy’s destination, who meet there to taste peer and — chocolate pies, ricotta pies and many other leccornies that can be tasted while being sat outside, at one of the little tables. In order to taste all those recipes we suggest visitors to stop at one of the meeting point of the nine island city halls. Very near to Procida harbour there are many bars and restaurants where you can have the chance to taste some of the most typical island recipes. You will be more likely to find fish dishes, as the tasty small octopus at Luciana’s way, with capers and black olives; noodles with sea chestnuts, very tasty and to be eaten in an evocative context, with genuine air and a breathtaking landscape. Approaching Ischia, near the harbour it is possible to find typical places where it is possible to taste ischitane special fish dishes, from the delicious fish soup, to the fantastic fusions of local dishes with the new gastronomic experimentations. We find the island culinary tradition, for example in small octopus, and in the rigatonis at the ischitana way. We also suggest you to taste some bold dishes, such as the Summer pappardelles, the very fresh bass fish, chicory, basil and even watermelon.

But there are also other interesting country dishes, where we suggest you to have a “consigliata”, but also many earth dishes, and seasonal monographs, as the winter maialata, together with mountain excursions guided by experienced naturalistic guides. Forio is another place where wine – gastronomic places are of high quality and of big variety. The range goes from bold recipes, as polipo verace dolceforte (hot sweet veracious octopus), where the recipe hot taste is garanteed by green peppers, and the sweet taste by chocolate flakes. You will find first courses, the result of a rereading of old traditional recipes, and second courses are fantastic, as for example fritto di paranza al guazzetto di scoglio all’isolana. In this place menus acquire literature influences, with a rereading of immortal recipes by Vasquez Montalban. It is also interesting to have a more concrete contact with the most rural and hidden part of the island where it is possible to find the most simple and genuine recipes, where you can taste appetizers as fried pickled rolls, and crock beans. The tour continues to Capri where we suggest you to have a stop at the lemons area. There are many restaurants and bars cooking typical recipes, and offering clients a fantastic sea sight, surrounded by lemon trees. Also some recipes have been inspired by the lemos influence in this area, such as mozzarella cooked directly on the fire and laid on a lemon leaf, and a fantastic dessert, tasting recipes from earth and ranging to the calamarata alla pescatrice, caprese quails, and least but not the last the famous caprese salad.

The lemon has become a cookery symbol, as well as a symbol of tradition in minor arts, since they will be painted on dishes and on majolicae. For the most fashionable visitors there are also places where local recipes meet the island jet set environments. So how could we forget to tell you about the famous Quisisana restaurant, and hotel, a place where some famous people have stopped sometimes, and a place where it is possible to taste the most refined, Gualtiero Marchesi’s cookery, who is the guru of the new gastronomy art.

Wine paths offered by the three islands are also very interesting. The wine produced in this area seem to have positively taken profit of the volcanic earth, and of the sea influences, always offering products of good quality and valuable taste. Ischia island, because of its volcanic origin and territory, it is also a country of great wines, and a privileged destination for wine tourists, who can very often find very qualified wine cellars where they can taste good wines.

Many of the proposed tours and itineraries offer the possibility to observe the wine making processes, and to be guided inside historical wine cellars. Here it is possible to visit the attached rural Museum, wisely prepared, and where there are plenty of finds. The Museum offers the opportunity to discover Ischia wine history. The wine production definitely aims at local vineyards, such as the red “Piedirosso” and “Guarnaccia”, which can quietly be tasted with the guide of experienced sommeliers in the firm reception hall. In Forio it is also possible to find interesting paths similar to those of Pietratorcia whose name brings to the great rock of used tufo, before the press got into use, to press grapes thanks to a clever and complex system of ropes and levers. An ancient model of this machinery is preserved every year, in the day dedicated to the grapes harvest. The wonderful cellars and the beautiful vineyards are open to the public for visits and tastings with the chanche to taste delicious dishes inspired to Ischia country cookery, under a wine vine-trellis of grapevines and on tables made of volcanic stone, where it is also possible to eat upon reservation. Bread and tomato is one of the unforgettable dishes, since bread is still backed in firewood oven, leavened with criscito, and the small Ischia tomatoes, thanks to the volcanic ground and to the generous sun of the island are tasty and sweet. Before leaving the vineyard let’s have a look to the “Fosso dei Conigli” (the Rabbits Ditch), a place where you are likely to sea rabbits, one of them “will suddenly appear before your eyes”. As an alternative it is possible to visit one of the wonderful tufo caves that cross the hill dominating Ischia harbour and overlooking the bench of the famous right shore, where there is one of the most ancient Ischia wine houses, which was founded on 1880 by Alfonso Perrazzo, who is also been producing since the ’90s liqueurs, such as for example the original rucolino, a rocket salade bitter, and other delightful ingredients, with a very recalling label “Ischia Sapori”. The last stop of this wine gastronomic tour is in Capri, where wine tradition, dates-back to three thousand years ago, and whose wine was particularly appreciated by Tiberio who used to taste this ancient nectar.