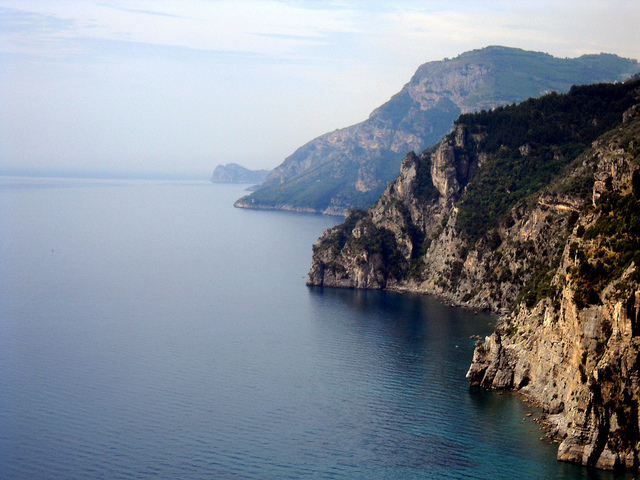 For those who have not ever visited it may be difficult to understand; sometimes words are not enough to describe the feelings and emotions provoked by the Amalfi Coast. An exaggeration? It could be, but the area is so extraordinary that you need to see it with your own eyes to fully comprehend its beauty. A first glance is enough to see its uniqueness. Rocks, sea, sheer drops and sheltered, cliff-side villages make up its rich tapestry. Following one single road (Highway 163) that, after every turn, provides an ever different and evocative panorama. Amongst the many communities, we have chosen four – Amalfi, Positano, Atrani and Praiano -, each one of them with it’s own character, and representative of the best towns and villages charmingly known as “nativity villages”.

Proud of its beautiful and glorious past, although not pretentious, Amalfi is the oldest of the Maritime Republics and is situated more or less in the centre of the coastline to which it gives its name. Once in the town, your visit should start with the historical sites and monuments, like the ancient armouries that still seem to echo the frantic work of the axe masters. It was here, in fact, that they made a famous galley with over 100 oars, destined for trading with the Orient.

A few steps on and you are struck by the size of the Duomo (dedicated to Sant’Andrea) located at the top of a flight of steps, bustling, especially in the evenings, with young people. When visiting the cathedral, despite the reconstruction and restoration works, you can admire various architectural styles (the most evident being the Gothic, the Roman-Amalfitano and the Moorish that characterise the whole city). Then, don’t forget, alongside the Duomo, the Cloister of Paradise, the jewel of 1268. In order to capture the true spirit of Amalfi it is recommended to leave the main roads, that are always full of tourists, and zigzag your way through the small, narrow streets between the houses, winding your way through the little squares and covered passages. The unique atmosphere of the city will surprise you. Finally it is worthwhile enjoying the walk to the Valle dei Mulini (Valley of the Mills), which you can reach by taking the central street via Lorenzo d’Amalfi.

Perhaps the best example of a “nativity village”, with its distinctiveness that strikes both the heart and the eyes. Extended along the slopes of the mountains Comune and Sant’Angelo a Tré Pizzi and uniting by the sea. Positano is a sort of open-air museum, enriched by its liveliness, colours, history and character. From the first decade of the 1900’s, painters, writers, musicians, bohemian artists and members of the international jet-set have continued to frequent the area, resulting in its cosmopolitan atmosphere becoming known all over the world. The residences of Positano, white, pink and yellow houses, weave themselves, spiralling, around terraces shaded by palms, lemon-trees, flower-filled gardens and cascading, multi-coloured bougainvillaea. In a picturesque winding path, made up of passageways, stairs and steps, you follow a maze of intricate alleyways and little squares, filled with a myriad of colourful shops and arty boutiques. With regards to the shopping, the foremost thing on offer is clothing, famously known internationally as “Positano fashion”.

In this vibrant kaleidoscope of colours and noise sits, above the Marina Grande, the great majolica mosaic dome of the Santa Maria Assunta church. Inside, baroque alters and a table dating back to the 12th Century. The parish is a world away from everything else, where silence and contemplation reigns supreme.

Amongst the focal points of the coastline is perhaps the village that best shows the local architectural characteristics. A close distance, almost attached, to Amalfi, it was, at the time of the Republic of Amalfi, the residence of nobility, in fact it was here that they crowned and buried the doges. In the “nativity village”, sheltered within a small passageway, barricaded by houses along steep, rocky walls, the Church of Santa Maria Maddalena stands proud in a prominent position on the Golf. Constructed in 1274, it boasts a baroque façade with a majolica dome and an impressive bell tower.

Also of particular interest is, the church of San Salvatore de‘Bireto, founded in 940, it is where the doges of Amalfi received their official decree with the presentation of the doges cap (bireto). The only other recommendation to visitors to this charming village is, to stroll through the intricate labyrinth of streets, stairs, arches, courtyards and terraces. The scenery that is offered everywhere you look won’t disappoint you.

Between Positano and Amalfi lays this quiet fishing village, whose houses enliven the rugged coastline of Monte Sant’Angelo a Tré Pizzi, which ends at the seafront with Capo Sottile. With regards to the artistic-monumental aspect, it is worth visiting the church of San Luca (that is custodian to a silver bust of the saint and paintings by Giovanni Bernardo Lama) in the upper section of the village, and in the residential centre, the church of San Giovanni (inside, it is possible to admire a beautiful majolica tiled floor that is still in exceptional condition). At the village gates you will find Praiano beach, a delightful little cove stretched out between houses and fishing boats.