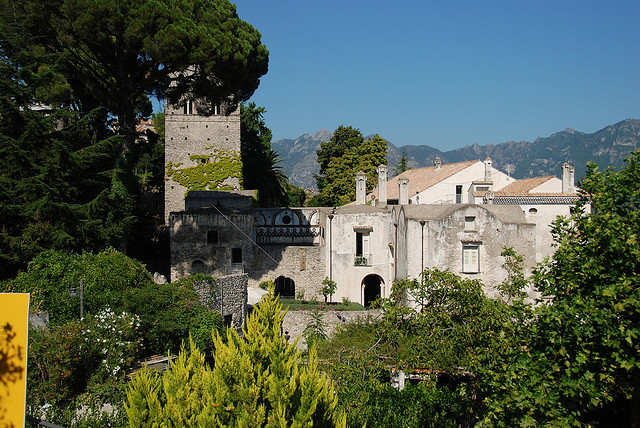 A small, incomparbly beautiful village which has attracted the most famous people over the centuries. The first one to be astonished by such beauty was the writer Giovanni Boccaccio who quotes it in his Decameron. It was the year 1350 and since then so many international celebrities have been enchanted by the sights of this place. Located on a promontory 350 mt above sea levels. In addition to the cathedral of St Pantaleone, the Roman churches and wonderful landscapes, Ravello worth a visit for its two pearls . Villa Rufolo and Villa Cimbrone.

On the right side of the square (where the cathedral is) you’ll see the quadrangular tower which gives way to Villa Rufolo: a group of buildings in Arabesque style built by the noble family Rufolo to symbolize their wealth. Now it is site of the Antiquarium, a precious archeological museum which is unluckly closed.

The public is admitted to visit (from 9.00 to 20, in summer, from 9 to 18 in winter) the Moorish cloister, the tower, the famous esotic gardens, whose beauty inspired the German composer Wagner for his Parsifal.

In his journal he wrote:” the enchanted gardens of Klingsor have been found”. He meant he had found the ideal setting for his play, the place where his hero had to resist temptations of satanic young girls.

That why, since then, at the beginning of the second act of the Parsifal, wherever it is is beng perfomed, the gardens of Ravello are immortalized.

The same gardens, every year in July, are setting of the world famous “Wagner Festival” important event for classic music.

Many famous people were astonished by this villa: the British politician Winston Churchill, the American actress Greta Garbo and the English writer Virginia Woolf. Antient noble residence, it was bought at the beginning of the ‘900 by lord Ernest William Beckett, one of the many English scholars involved in the Grand tour. It is a wide complex including, in its central area, a luxurious 4 stars hotel, an arabesque cloister and an arched cript in gotic style. In the flowered garden surronding the villa (public is admitted from 9.00 to sunset) you can admire: the small temple of Bacco, the cave of Eve ( a natural grotto with her marble statue); the terrace of roses ( an Italian style garden) a bronze statue of David and the tea room. In the garden you will also admire the immense alley, covered with a white glycin pergola and the temple of Cerere, at the end of the alley, the breathtaking terrace “ belvedere” with one of the most spectacular view over the gulf as far as Paestum, also called “terrace to the infinite”.