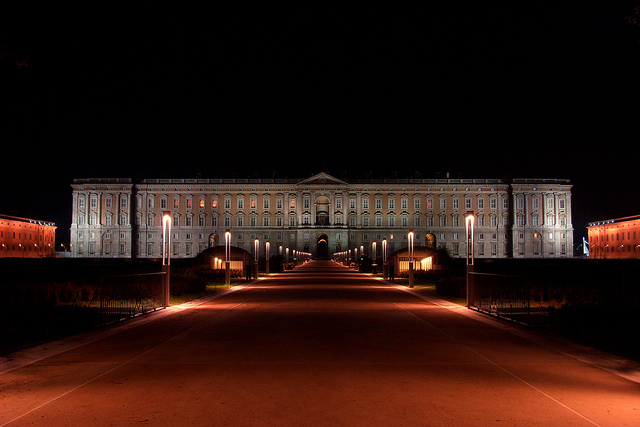 The Reggia di Caserta (Royal Palace), designed by Vanvitelli, with its Park and English Garden, was built in the mid 18th century on commission of the king of Naples, who wanted it to rival the Palace of Versailles. Vanvitelli, the most famous architect of the period, accepted the challenge, and today it is one of the most visited of Italian monuments, and is an interesting example of a royal residence along with those in Naples (Palazzo Reale, Capodimonte, Portici) and in the provinces (San Leucio, Carditello and Persano).

Vanvitelli’s genius is evident in the architecture of the imposing complex. The visit begins with the Galleria and continues with the Staircase and the enormous statue of Heracles, which was found in the Thermae o Caracalla. Next comes the Vestibule, with its ornately decorated ceiling, and the Cappella Palatina, followed by the Royal Apartments, accessed through the Sala degli Alabardieri (halberdiers), with its stuccowork, decorations and busts of the queens and then by the lavishly furnished Sala delle Guardie del Corpo (bodyguards). Through to the splendidly furnished Alexander Room (for entertaining people without a title) and onto the Mars Room, which is even more sumptuous and magnificent. Thence on to the Astraea Room (for diplomats), with its painting of the goddess of Justice, Astraea, the high-relief of the group of Heracles and the Provinces, followed by the largest room, the Throne Room, with its splendid floor, stuccowork, 46 medallions of the kings, furnishings, frescoes, and Throne.

The luxuriously furnished New Apartment includes the Council Room, the Drawing Room, the Bedroom, and the Bathroom of Francis 11th. The bath is a large tub in oriental granite; the Empire-style toilet in the centre comprises 32 pieces in marble.

The next room is the Study of Francis 11th, and beyond it the Murat Apartment begins, with two Antechambers, Murat’s Bedroom, the Drawing Room and the Pio IX Chapel, all of which are magnificent.

The Old Apartment, on the opposite side, opens with the Sala della Primavera and continues with the Sala dell’Estate (from the names of the frescoes). Sala dell’Autunno,Sala dell’Inverno (Spring, Summer, Autumn and Winter, respectively), the Study of Ferdinand IV, the King’s Drawing Room, Their Majesties’ Bedroom, and numerous other rooms, all lavishly furnished and decorated. This wing includes the Palatine Library, with two Reading Rooms and three Library Rooms), the Elliptical Room (with the Nativity Scene created by the royal family), the Picture Gallery and the precious Collection of Modem Art, all of which contain splendid decorations and furnishings. Reminiscent of the San Carlo in Naples, the Theatre, which is in the Courtyard, is remarkable. It has 41 boxes and includes the Palatine Library with the collection of opera librettos of the period.

The secrets of the garden, discover the Royal Palace in the moonlight.

The park of the royal palace, considered one of the most beautiful gardens in the world, is hosting , running from June 19, the second edition of “ Routes of Light “ which had a great success over the last few years.

Every week-end the palace will be site of a wonderful show; visitors have the chance to walk along an extraordinary route made up of lights, special effects, narrated stories and acoustic performances, with a magical background of Neapolitan music which will help them discover the secrets of the Palace: its gardens, its kings and the reasons why it was built.

The route ends with a visit to the English garden, the most significant part of the whole park.

The path including the English garden is about 1 km long: after a nice walk along the entrance alley, lighted with torches and with a 18th background music, you will be lead about by art historians.

They will describe the palace and will narrate its legends. Visitors will admire its Vanvitellian façade, after they will be driven on a sightseeing-bus as far as the huge Venus and Adonis fountain.

On their way, filmed documents, music and light games will lead the visitors into the magic atmosphere of the places.

Later, at the fountain of Diana and Atteone, visitors have the possibility to assist a wonderful perfomance made of lights, sounds, voices and colours explaining the legend about the two figures of the statue.

The routes end up at the English garden visitors will reach in small groups.

Here, each visitor will be given a torch, the alternance of dark spots and coloured lights together with the musical background and magic atmosphere will make them live an unforgettable experience.