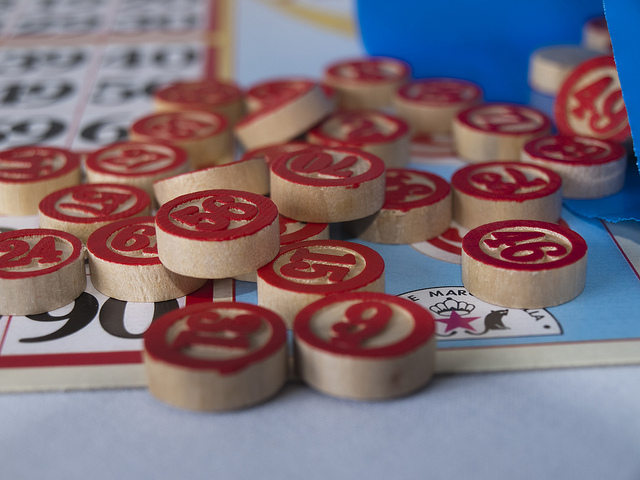 Christmas is also the time in which we look to the past with regard to games. We put aside those devilish devices of video games and such like, and we have fun playing traditional games. Everyone aged 5 to 80 and upwards, armed with jingling coins and a handful of legumes (dried beans, chick peas, broad beans) or cardboard chips to mark off the numbers on their cards. All ready for Tombola, legendary, enthralling, loved by the fortunate and almost hated by loser who, nevertheless, count on a comeback. The stake depends on the number of players and cards bought. Each has their favourite cards, jealously preserved with their name written on the back. The resulting sum is divided to form the various pots: starting with two on a line and ending with tombola, the jackpot for who first manages to cover all 15 numbers on the card.

Usually, the numbers are fished from the “panariello” by the one purchasing the numbers chart. And the game continues till late at night in an almost infernal cacophony of voices, all at once to ask if such and such a number has been called, or if the three in a line or four in a line has already been won. It is a jovial atmosphere that forms part of the game itself, offering so much fun and cheer. If tombola holds a special place among Christmas games, others are also becoming popular such as Mercante in Fiera, the game in which flora and fauna, endearing babies, prosperous lords of the manor are bartered, forming a conspicuous jackpot from this auction of cards. Mercante is ranked alongside other card games, particularly Neapolitan, such as Sette e Mezzo and Scopone Scientifico. The ways to unite families, to rejoin young and old are many.

As anthropologist, Marino Niola, wrote: “There is a socializing and communising aspect of games, such as those played at Christmas, that occupies a frontier zone between recreation and ritual. Tombola, for example, is often played as the New Year is welcomed in, since it represents the world of numbers corresponding to the obscure secrets of reality: a concept deriving from Pythagoreanism. The game also has the role of again bonding the community fabric in this festive period when we meet around a table. At Christmas, games manage to involve everyone in a linear time experiment that disappears never to return and that of recurring time (the festival occurring every twelve months), and it is this time experiment that reunites all people of all ages”.