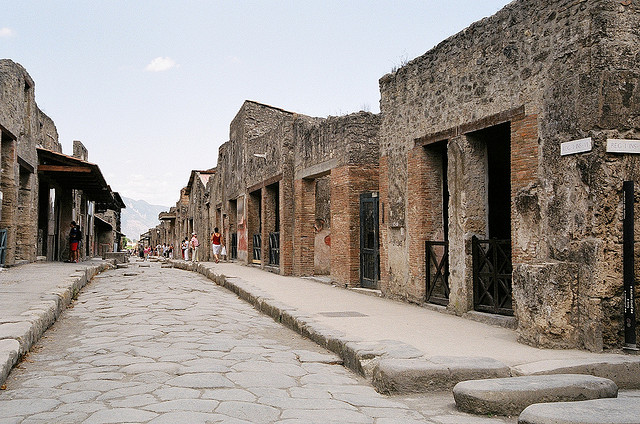 The Archaeological excavations of Pompeii are among the most popular and renowned throughout the world for here, more than anywhere else, it is possible to relive the civilisation of those times. Life in Pompeii flourished up until August 24th, 79 AD, when the sleeping Vesuvius awoke and buried the city under 4 metres of ashes and lapilh. A certain amount of detailed information about the disaster has emerged: 34 people died in the in the House of Cryptoporticus, 20 more died in another building. In Via dei Sepolcri none of the guests escaped from a funeral banquet and their bodies were found still reclining on the triclinia. All the gladiators who lived in Via di Noia (54 men and a patrician woman, judging by her jewels) died of asphyxiation. At the end of the 16th century, during work to reclaim the area, buildings with frescoed walls emerged. Since then, the excavations have brought most of the city back to light, a complex that includes city gates, streets, gymnasia, thermal baths, civil and religious buildings, modest dwellings and stately homes, shops and fountains. The graffiti are remarkable, with a quip for every circumstance: deprecations, insults, lovers’ laments. Among the highlights to see: the Villa dei Misteri, Amphitheatre, Forum, Thermae, Theatre, Palaestra, Necropolis, Via dell’Abbondanza, Via dei Sepolcri, the Temples of Zeus, Apollo, Jupiter, Vespasian, Fortuna Augusta, Isis, and the Sanctuary of the Town Lares. There are many public and private buildings, with elegant frescoes and peristyles.A recent find has been a luxurious resort containing sculptures, frescoes and furnishings: the “satellite city” of Murecine.

The excavations of Herculaneum have revealed a small town, but their evidence is unique because the city was buried in mud, which preserved the structures and furnishings. It was discovered by chance, in 1709. The urban landscape is Graeco-Roman, with Decumani, Cardini and Insulse in an area of 370 by 320 metres; it contains folding doors, peristyles, mosaics. Paintings, household objects, and even the equivalent of a “bank”. The walls of the House of the Bicentenary carry the imprint of a cross, which confirms that the Apostle Paul arrived in Pozzuoli in 63. The Villa containing papyrus is unusual; it was the library of Caesar’s father-in-law, Lucio Calpurnio Pisone. There was a limited number of shops (thermopoli, coupons, pistrinx, fullo-nichaeare, or bars, taverns, bakeries, and laundries) in Herculaneum. Among the most poignant remains are those of the Houses of the Hotel, Skeleton, Two Atria, of the Loom, of the Bicentenary, of the Deer, and of the Samnite House. Outstanding also the Thermae, Palestra, Therms suburbans and Theatre.

The Great Archaeological Area of Vesuvius also includes the Archaeological Park of Oplontis and the towns of Stabiae and Boscoreale. Oplontis, also buried under the eruption of 79 AD, was a residential centre for families and extremely high-ranking figures. Excavations have revealed splendid Villas, with precious and exquisitely made jewels. The most important is the Villa of Poppea, wife of Nero, which was preserved with its architecture and decorations in excellent state. An inscription states that it belonged to the second wife of Nero, Poppea Sabina, who had been murdered by order of the Emperor 11 years earlier. The frescoes are magnificent, the rooms large and luxurious: the atrium, peristyle, thermal complex, reception hall, garden, masters’ rooms and the rooms for the servants, portico, lararium, piscina. Later an the remains of the Villa of Caio Siculi were brought to light, of which some elements are now stored in the Museo Archeologico Nazionale di Napoli, and the Villa of Lucio Crasso Terzo.

From ancient Stabie there are the Antiquarium (11 rooms with frescoes; fragments of floors; vases;funeral objects; sculptures and bronzes) and the remains of the Villas Arianna, Petreliune, Carmiano Sassole.

At Boscoreale there are the Antiquarium and the “cellai” (spaces for agricultural implements and barrels of wine).