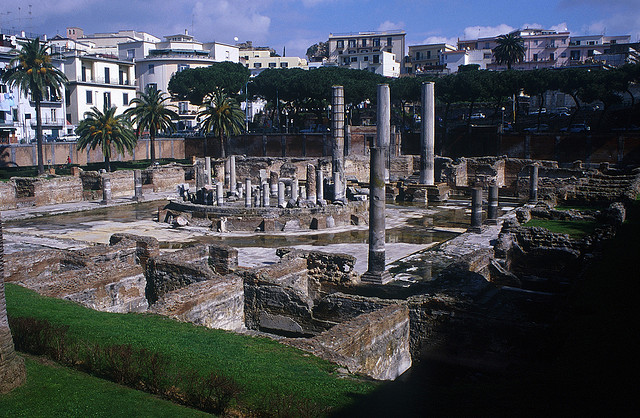 Pozzuoli, archaeological area by excellence, together with Cuma, was the most ancient centre of the Campi Flegrei. It was founded during the VIth century A.C., by a colony of Greek exiles coming from Samo, who founded an inhabited centre in the Rione Terra, which was named Dicearchia, which means “fair government”, in polemic opposition to the government of their own city dominated by the tyrant Policrate.

During the Roman epoch it was called Puteoli (little wells), and became the most important commercial port in Rome, and during the IInd century, some other important public buildings were built in the city, such as: thermal baths, fountains, ninfei, temples, stadiums and markets. In the heart of the city there is the Anfiteatro Flavio (amphitheatre Flavio) (the third biggest theatre in Italy, it can contain up to 20.000 spectators), dating-back at the end of the IInd century B.C., epoch of Vespasiano, built in opus reticulatum, where the gladiator’s games took place. Currently the bearing structure and the undergrounds are still preserved. The undergrounds were built with tiles, and had three corridors, are very charming elements and of particular archaeological interest. In one of these spaces, on 1689, it was built a chapel dedicated to St. Gennaro where, according to the tradition, the Saint and its companions got exposed to wild beasts, without being attached. At Nerone’s epoch, it was built the Anfiteatro Minore (the smaller amphitheatre), built with opus incertum. Walking through Via Terracciano, there are some ruins of an ancient thermal building, the Tempio di Nettuno (Neptune’s Temple).

The Ninfeo di Diana (a place where nymphs used to go), was probably connected to the near thermal baths. Of this last building we can still visit the circular base, and part of the elevated base. From Piazza Capomazza, through Via Pergolesi, it is possible to reach the Tempio di Serapide (Serapide’s Temple), (also called Serapeo), a good place where it’s possible to relive the magnificence of the Roman civilization of Pozzuoli. The temple is named after the statue of the Egyptian god Serapide, but actually this area was the ancient Macellum, which was the ancient market annexed to the harbour area. The Macellum was built during the epoch of the Flavi and has a great archaeological importance. The reading of remains allows to understand that it was constituted of a quadrilateral area surrounded by a portico with granite or cipolin columns, with trading premises, public baths and shops and, in the centre, a circular tempietto (little temple).

This is a place of great charm, considering that the bradyseism phenomenon made the building ruins sink and then resurface from waters, whose reached levels are visible by the signs left on the columns (for this very reason the temple is called “bradyseism thermometer”). But the heart of Pozzuoli is the Rione Terra, a spur of Rock stretched out in the Gulf of Naples where, according to Greek-Roman historiography, Greek exiled ariived in this area and founded Dicearchia. At the end of the Ist century B.C., this place became a Roman colony and, for this reason, it was arranged with an urbanistic plant with the typical subdivision in hinges and decumani (one of the two main road axes). During the IVth century A.C., the increasing phenomenon of bradyseism submerged the harbour works, and marked the final decline of the city. The following centuries have witnessed the building – up of new structures, overlapping the ancient ones, in this way, the ancient road map got lost. After a bradysismic crisis the whole Rione Terra was evacuated on March of 1970 but, thanks to an excavation campaign, the ancient structures of the city were brought to light, and today it is possible to visit about four thousand squared meters of the ancient Roman city, with evident traces of a hinge and of a decumano (one of the two main road axes). The entry is a simple front door in Largo Sedile di Porto, but once inside you will have the opportunity to see the taverns, the baker’s shop with wheat millstones, the little fishermen’s residences, and everything that made this place a real suburb.

Always at Rione Terra, on the higher part, there is a very interesting evidence: the Duomo of Pozzuoli, built on an ancient temple, which during the Vth, VIth centuries was turned into a Christian church. Up to 1631 the building generally preserved the original structure of the Roman temple, when the works for the Baroque transformation started, on a project by Cosimo Fanzago (1591-1678) and Bartholomew Picchiatti (? – 1643). On 1964 there was a fire that destroyed the Baroque restoration, revealing the structure of a Roman temple called Tempio di Augusto (August’s Temple), a rare example of august classicism, and whose excavations allow to recognize all its elements: the high podium incorporating the remains of a temple which rose in this place and made in tuff, dating-back at the Samnite age (II sec. AC), the deep pronaos, the cell where semi pillars are set, up to the frame and to the pediment. There were many paintings that escaped the fire, paintings such as of Artemisia Gentileschi (1597-1652 ca.), Giovanni Lanfranco (1582-1647). Massimo Stanzione (1585 ca. – 1658 about), etc…, and they are now preserved to the National Museum of St. Martino.

The Duomo also houses the grave of G. B. Pergolesi, the famous musician born to Iesi on 1710, and dead in Pozzuoli on 1736. Continuing on the Domiziana, there is the possibility to enjoy the view of the Lake of Averno, with the sea and the Aragonese castle of Baia. Another important stop for an archaeological tour is Baia, one of the residential centers par excellence, whose name derives from the place where Baios, a helmsman of Ulysses got buried. Baia includes the vast area between the promontory of Miseno and the Lake of Lucrino. Baia can be defined the most mundane and rich station of the empire, it could be defined as the Blue Coast of the antiquity. At present the greater part of the wonderful buildings of Baia are under the sea, Sea Archaeological Park, where it is still possible to see the remains of the imposing constructions and the precious floor mosaics. Those remains are really worthy to be visited, possibly with special boats with a glass floor, or it is also possible to visit those remains, making diving, with special equipment.

The Archaeological Park is a wonderful Roman imperial complex (Ist – IVth century AC), stretching-out on the impending soipe of the inhabited area.

Among the different sections that constitute the enchanting park (Villa of the Ambulatio, magnificent example of late-republican villa, the sector of Sosandra, probably with the lodgings for thermal baths the clients the sector of Venus, entirely occupied by thermal buildings) let’s give a particular attention to the temple improperly called Temple of Mercury, an enormous dome thermal classroom, which still charms people with the unreal atmosphere characterizing the inside of the structure invaded by water. Plasters, mosaics, paintings are well preserved in many vain of the building complexes of the park. It has been thought that the whole complex was part of the imperial palcitium of Baia, with its very known springs. Worthy of note are also the rests of the Temple of Diana and the Temple of Venus. Bacoli was another residential center that has characterized the region baiana (in Baia and suburbs) during the Roman age. At the beginning of the inhabited area there is Via Agrippina, which takes its name after the so-called Sepolcro di Agrippina, mother of Nerone, even if those remains belong to a cavea of a small Odeon, a little theater for concerts, of a Roman maritime villa.

As an evidence of the ancient waterwork of the area, there are the Cento Camerelle (One hundred Little Rooms), a plant of water tanks of one of the most ancient villas baiane, Quintu Hortensius, datable to the Ist century A.C. Southwards in the inhabited, there are the ruins of one of the most monumental Roman cisterns, the Piscina Mirabilis, whose vault leans on 48 quadrangular pillars prepared on four raws to form five aisles, similar to those of an underground cathedral. From Bacoli we reach Miseno that takes its name after the mythical trumpeter of Enea drowned in these waters and buried here. Of Roman origin, it has always had a military character up to the Vth century when it lost its strategic and defensive role. On Via del Faro there is the best preserved monument of the ancient Misenum, a complex destined to the cult of the emperor, probably the Templum Augusti. Presumably also the Foro of Misenum should be in this place, together with main public buildings. The temple, dating-back to the IInd century A.C. is today partly sunk because of the bradyseism effect. The central space is the votive chapel, made with a rectangular cell, whose walls are in grid and with an apse on the back wall. It was possible to enter there though a marble staircase flanked by the statues of Venus and of the emperor Nerva.

Currently visits are not permitted, but a lot of statues rediscovered during excavations, are now preserved at the Archaeological Museum by the Baia Aragonese Castle. At the foot of Monte Miseno, near the beach of Miliscola, there is the cave of Dragonara, a big cistern with five aisles, meant to supply water for those ships that went under the fleet. Always near the Cave of Dragonara, the delicious parish church of St. Sossio rises, where on its entry staircase, there are preserved some marble remains coming from the Roman Harbour. Near the Dragonara Cave, there are a series of spaces, dugout in the tuff, pertinent to a villa, probably the villa of Lucullo, where there are walls of crushed crock (cocciopesto), and structures in opera vittata, grid and bricks. Crossing Via Domiziana we reach Cuma, one of the most ancient Greek colonies, dating-back to the half of the VIIIth century B.C. Other remains of the Greek period are the finds of fortifications on the hill of the acropolis, datingback to the Vth century B.C. The excavations carried-out in this archaeological center par excellence have brought to light, in the oriental part, different buildings, like the Foro, the Temple Capitolino and the most evocative monument of Cuma: the Antro della Sibilla Cumana, dug-out in its more ancient part, from Greeks in the VIth- Vth century B.C. and today it is a long corridor divided into section with many trapezoidal arcs, cut in the tufo and illuminated by six side openings, leading to a final arched space. Very accurate studies have established that this was a thermal plant used as thermal space, and then used, during the Christian age as a cemetery area.

To the right of the entry of the Antro della Sibilla, there is the Roman Crypt which cutting the hill of Cuma connected the low city with the harbour. This is part of the complex of works of military road maps that Agrippa wanted to build, around the 37 B.C. Always in the acropolis, the Temple of Apollo is very important, it was rebuilt in the first imperial age on the spot of an ancient sanctuary of Greek or Samnit age, even if the legend tells it was built by Dedalo, who arrived here at the end of his wonderful flight from Creta. Currently there are the remains of the floor, of the colonnade and of the quadrangular pillars ’53 that divided the cell at the center of the temple. On the floor there are some rectangular openings that are burial sitches, dug by the Vth century B.C. when the temple was turned into the Christian basilica.