Punta Campanella: Between Myth and Reality 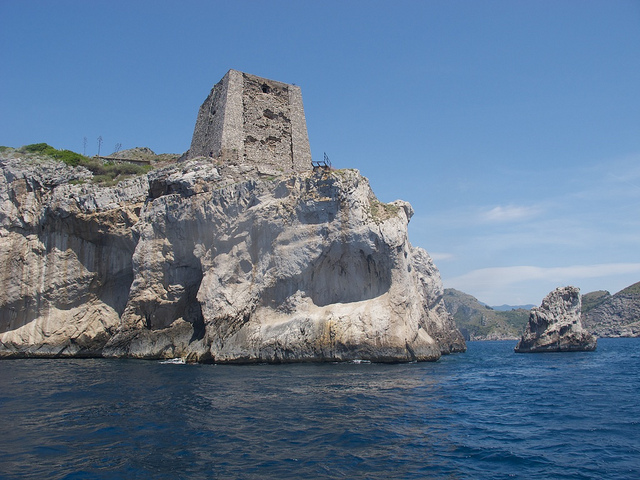 Campanella Point is on the extreme edge of the Sorrento peninsula, at the eastern limits of the Gulf of Naples. The headland stretches along the coast and almost seems to reunite with the island of Capri. In-between there are three nautical miles that have always been treacherous for sailors and fishermen: the mouth of Capri, where the diverse flowing currents create whirlpools and vortexes, meeting the vertical rocky coastline which doesn’t offer landing facilities. At this point, according to legend, Ulysses encountered the Sirens; one can still see the spirits of the seamen on the glimmering rocks of the Sirens. Sorrento has featured it’s name as being situated on the headland of the Sirens, Sirenusium, where the temple of Campanella Point stands. A temple as white as snow, one of the wonders of the world according to Norman Douglas (1868 – 1952) who dedicated a book to the land of the Sirens.

Now, there isn’t a trace, of the Sirens, the disappearance of the tomb of Partenope as the myth recounts: “… on their rocks as white as snow they cease their song. One casts the flute, another the lyre, crying out as the moment of their death arrives and launching themselves from the top of the cliffs into the abyss of the sea and their bodies transformed into rocks…”

Campanella Point is one of the landscapes of major natural, historic and archaeological interest which you are able to visit. To start this extraordinary walk, you leave the small square of Termini – a hamlet of Massa Lubrense – easily reached with the SITA bus from the Sorrento train station, arriving at Nerano. From the small square at Termini, follow the many signs to start a long but extraordinary journey to Campanella Point, across a stretch of countryside with a striking panoramic view. On the left there is the mountain of white rocks with its typical vegetation and on the right the sea with little bays and inlets that you can follow non-stop. The first part of the route finishes at Mitigliano cove with its characteristically Mediterranean vegetation; closer to Campanella there is an extraordinary metamorphosis, and the vegetation is distinctly much lower and less rigorous and where the wild olive, myrtle, juniper and rosemary triumph. The sea breeze to which the trees are exposed, shapes them into isolated forms and it is here where the seagulls nest. In this area it is also possible to see the peregrine falcon or the kestrel. At the extreme edge of Campanella Point in wild isolation rises the temple of the goddess Minerva, at the point which there was subsequently erected the tower in the sixteenth century, still today it is possible to admire the remains. This tower represents a material testimony to the heavy defence system built by Roberto d’Angio, when in the course of the sixteenth century began the threat of raids from Saracen pirates who for three centuries created continuous torment for the population of the coast. Near the temple of Greek origin there stands a roman villa, but time has left only small remains of the extraordinary construction. Other interesting features are the ruins of a speculum (a signal tower) which rises majestically, facing the lighthouse of Villa Jovis on Capri. The ancient road that leads to the temple of Athena is preserved, still today for long stretches. Of these extraordinary constructions, today remains the silent rocks, testimonies of an extraordinary time, smoothed by the waves and sea breezes.

The destination of this journey and exploration is recalled in the Homeric verses “Odysseus after having left Circe and before entering the straits between Scilla and Cariddi, encountered the Sirens.” The residence of Pomponio Mela above the Sirenuse (small islands called Li Galli) and others on Capo Ataneo or Promontorium Minervae (Campanella Point) are only some of the wonders which have been preserved by their custodians, tangible testimonies to our past. It is important to preserve and protect these uncontaminated environments which contain archaeological and historical treasures of extraordinary natural beauty.

Therefore, to safeguard these treasures there has been a protection area created along the coast so that these treasures can be handed down to future generations. The Area Naturale Marina Protetta Punta Campanella was born out of the necessity to safeguard this extraordinary land, rich in history, culture and natural marine environment, unique in the world.

Also, an expression of geological and Mediterranean ecological events, an uncontaminated landscape and the myth to which it is hosted which is still reflected today across the centuries in the extraordinarily clear waters.

It is an unforgettable walk, here the perfumes of the sea are mingled with those of the mountain to create a suggestive atmosphere that evokes memories of an extraordinary time, made of heroes, grand gestures and legends suspended between reality and fantasy.