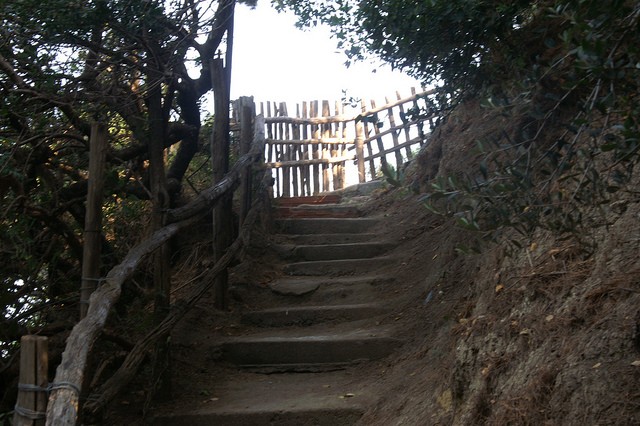 Take the SITA bus or the orange circumvesuviana bus straight to Massa, stop straight after the little piazza at the end of the line, by the sign “Hotel Dania”. Follow on foot down the little road that starts under the “Hotel Dania” sign. There are three alternative paths, but this is the most comfortable, practical and fastest for those who arrive there by the SITA bus.

The brook that flows into Puolo beach signals the start of the Massa Lubrense coastline that continues for more than twenty kilometers. At the shoulder you of the ancient dwelling you can see “e Tese”, zig zaging paths that join the marina with the Massa to Sorrento road. Here there is the long inviting beach suitable for bathing, characteristic restaurants, many bars, a tobacconist’s and an indispensable public telephone box. From the beach you can note an old quay, used once upon a time to allow the load of big limestones extracted from the nearby quarry, which were used for the construction of the dam outside the harbour of the port of Naples. Closed in the 1950s, today it is only an enormous wound in the imposing mountain, while the immense space that opens at the front, has become a huge car park joining the main road from Sorrento to Massa to a toll road that crosses the property of Archille Lauro, the famous “Commandant”.

From the coastal waters you can glimpse a dock of a hundred meters nesting in the solitary little beach. The small bay is magically guarded between the limestone coastline of the Massa Cape and the hopper used to load the barges of rubble and gravel is the famous…. Portiglione. The hopper rises exactly where old texts indicate the ruins of the Temples of Giunone and Ercole.

Portiglione was the first safe landing on the peninsula, sheltered by the winds and by the western seas deriving from the Point of the Campanella. Once the sea came inside the cave of which you can now see only the entrance. To the right of the beach, various roman ruins withstood the attacks of the time, amongst these and one that stands out with its particular beauty and originality, is a circular cistern.

Continuing by sea along the calcareous tall wall, around 5 meters, you reach the western limit of the Baia di Puolo the Cape of Massa, better known as Capo Villazzano.

The solitary Marina di Puolo is found halfway between Marina Grande in Sorrento and Marina della Lobra (in Massa). To look at it from the sea, some visitors paying little attention could mistake it for the Marina of Massa, as said by Sardella, “Chesta nun è Massa” (This isn’t Massa). The elderly of the beach tell of Sardella, a fisherman from Marina Grande, who used to transport travellers coming from Sorrento to Massa with his boat. One day he argued with a tight fisted tourist. Disembarking at Sorrento the traveller wanting to avoid the land route from Sorrento to Massa, and was not prepared to pay for Sardella’s expensive toll. After a weary negotiation, Sardella (apparently) conceded to let the traveller climb into his boat, pocketing the money (half the price of the normal ticket) and began to row. Arriving at Puolo (which precedes Massa by several miles) he off loaded the passenger leading him to believe that he was at Marina della Lobra (the landing at Massa Lubrense) and went away. From this anecdote came the customary saying “Chesta è Massa – (This is Massa) as said by Sardella” at the crossing in front of Marina di Puolo.