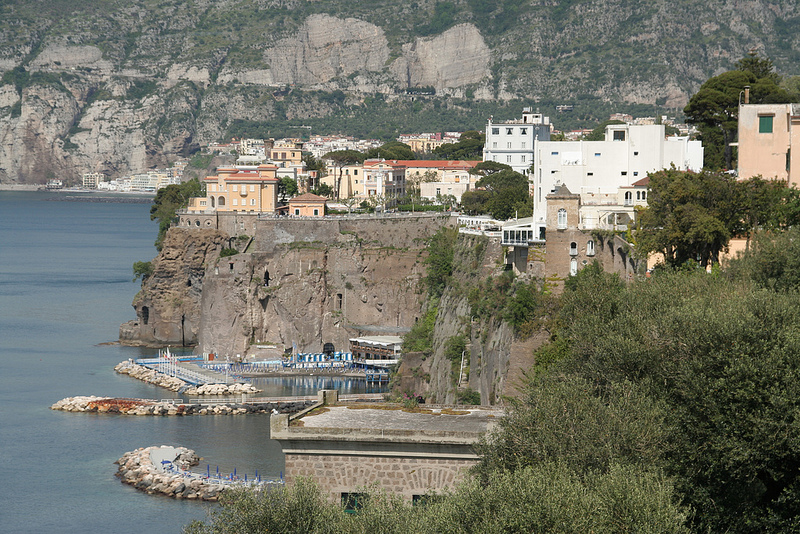 Popular traditions, the legend of the myth of the Mermaids, the maritime devotion, anecdotes and curiosity, the wooden inlay, as well as poets and musicians of past centuries, still relive in the peninsula suburbs. Let’s start from Vico Equense, a town famous for the Festival Internazionale delle Tradizioni popolari (International festival of Popular Traditions) which is held on August and it is based on the cultural exchange among distant populations, through songs, dances and sounds. Another famous celebration is the Festa delle Pacchianelle, one of the most important Christmas demonstrations. This celebration has been taking place since 1909, on January the 6th, which is the fascinating living manger with over 300 actors, who follow one another in a parade, in customs inspired to the eighteenth-century Neapolitan manger.

The evocative demonstration is called of the “pacchianelle” for the participation in the parade of about ten little girls and women, who under the very vigilant looks of tourists, make a parade in country suits, bringing to the Bambin Gesù (Child Jesus) many local typical products. Leaving Vico we meet the small center of Alimuri. The legend tells that the name of this center is linked to one of the Saracens raids who, coming from the Amalfi coast on 1558, suddenly plunged here raiding people and embarking prisoners. The legend refers to the desperate cry of a women saying (Aho, li mori!) to explain the origin of the name Alimuri. A country close to Alimuri, and of similar maritime tradition is Meta di Sorrento, as evidenced by the little buildings of captains of long course and by shipowners rising in the inhabited center. The tradition tells that in ancient times, there was a temple in Meta dedicated to Minerva, where currently rises the basilica devoted to the Madonna del Lauro.

Continuing along the coast we find many folkloristic and religious demonstrations, which during the year take place in Piano di Sorrento, evidence of the wish to preserve unchanged a very ancient cultural patrimony, as Christmas in Piano, during the month of December; the Carnival, which takes place during the month of February; the historical Representation of the Passion, the Holy Wednesday, and someone likes it Piano a series of artistic-cultural demonstrations, which take place during Summer time, from July till the 31st of August. For literature keens, Piano offers a permanent demonstration about culture, denominated I salotti letterari (Literary Living Rooms), as well as the Review of classic music which takes place on May. The yearly demonstration of the Colli in festa (Celebrating Hills), takes place from June the 26th till the 29th, near the small town of Colli San Pietro, and whose aims is to give importance and to promote the culture and the country traditions through the rediscovery of ancient misteries and expositions of ancient coaches. This is the commemoration of an ancient country party dating-back to over one thousand years ago, propitiating of the good crop, organized by Benedictine monks of the abbey of San Petri ad Germinam (currently Ancient Park of the Prince) at the same time this celebration took place, there was a fair, true attraction for the neighboring countries.

From Piano di Sorrento we reach Sant’Agnello that takes its name from the venerated Saint patron, inside the Baroque church located in piazza Sant’Agnello. The tradition tells the husbands of women in labour use to go near the statue of the Saint, also from centers near Sant’Agnello, to ask him that everything should go right. A great tradition is linked to the Tenuta (Estate) della Cocummella, which on 1597 was given from a noble of Sorrento, Gianvincenzo De Angelis, to the Jesuits, in order to become their center, and after different enlargements, it fell in disuse during the half of the XVIIIth century, after the expulsion of the Jesuits from the Neapolitan Kingdom. The estate was then suppressed, and except for the church, it became the center of the Hotel Cocummella, which today has become the pearl of vacations in the peninsula sorrentina, where important characters have spent a vacations there, as the Duke of Wellinghton, Giuseppe Bonaparte, Gioacchino Murat and the English writer George Gordon Byron. Surrounded by an aura of mistery is Villa Nicolini, built in the XVIIIth century and located in a place called Marinella. Around this villa there are histories of malignant spirits and superstition.

Let’s then approach Sorrento, the mythical Mermaids land, described by Giovan Battista De Curtis in the famous song known all over the world, Torna a’ Surriento, a land that inspired famous characters like Wagner, Giuseppe Verdi and our wonderful singer Enrico Caruso. A very important characteristic in Sorrento is the craftsmanship, especially the wood and the ceramics inlay. Continuing along Via San Nicola, there is the building housing the Museobottega della Tarsia lignea, which was founded to make the history of tarsia sorrentina continue, with the planning and the trading of a cultural renewed manifacturing. It is a building whose aim is to valorize the exploitation of artistic craftsmanship sectors, which still have at present a great productive reality. The eighteenth-century building housing this inestimable treasure, preserves furniture and objects of the ninenteenth century, which underline the technical and decorative sides of single inlay shops of that time.

The tour continues with the strong religious cult of Massa Lubrense, especially strong during Easter period. Let’s remember the Camminata dei 23 Casali, which takes place yearly, during the Holy Saturday day and during the Day of the Liberation (25th of April), with the purpose of rediscover the Mediterranean maquis at the shade of tall olive trees. Along the walk it is possible to stop to observe particular places, and to enter some minor churches, like San Giuseppe di Prasiano, Santa Maria del Campo, and Santa Maria di Loreto, usually closed and therefore unknown to many people.

On June the 13th it takes place the Fiest of Sant’Antonio, at the Marina di Cantone: fishermen bring the statue of the saint on their shoulders among the houses of Nerano, and then they leave with their boats, while gullets follow to the bays the statue, in procession, to then move towards Positano. Let’s displace then to Punta Campanella, the extreme peninsula edge, where it is said that Ulysses, as Strabone wrote, had raised a temple to Atena (Minerva for Romans) after the war of Troia, where today it is possible to admire the old remains of an ancient Roman villa, in the archaeological area.

According to an ancient legend in the mythical Punta Campanella “an ancient vessel sails at night, governed by a crew of ancient Romans that blocks the strait between the end tip and Capri”, as remembered by Norman Douglas, in its work “The Mermaids Land”, who loved and lived in these places.