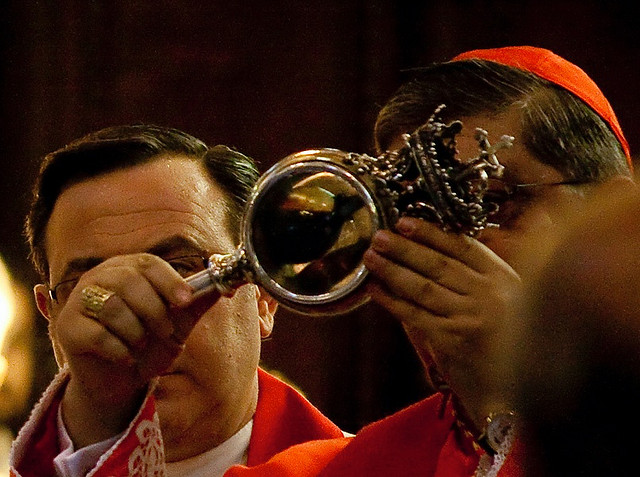 Campi Flegrei are the land of magic, where history, myth and legend have been continuously meeting, until they almost mixed-up. This is the land of Sibilla Cumana, for Boccaccio this was the place where Venus, the god of love was born, the land with many craters rich of thousand of mysteries, destination of the nineteenth century Grand Tour, a stop that a standard European educated person and traveller cannot miss, since in his place it is possible to find many stories and descriptions of the classical Latin and Greek. Not only myth but also demonstrations and religious traditions starting from September the 19th, the day of the miracle of San Gennaro, protector of San Gennaro.

It is from the religious devotion that we begin our itinerary, starting from Pozzuoli near the Basilica di San Gennaro, situated on the descent to the Solfatara, where the Saint martyr was beheaded. Here there is a stone, with a little red blood dot preserved. This dot was thought to belong to the Saint, who on every 19th of September liquefies, at the same time the blood contained in the cruet, preserved inside the Cathedral of Napoli, liquefies too. There is another legend linked to San Gennaro, a legend about a vandal action suffered by the statue of the Saint, at the time of Saracen pirates. Those pirates with a stroke of scimitar cut the nose of the statue. Believers told many times to various sculptors to build a brand new nose, but none of the nose which were proposed could properly fit on the mutilated face. Meanwhile it happened a strange thing, since many fishermen started to find in their nets a piece of marble with a strange shape, which was immediately thrown back in sea.

It was then one of these fishermen to realize that stone was nose shaped, consequently he brought it back to the church where, according to the legend, the stone flew from the hands of the fisherman to return to its place of origin between the eyes and the mouth of the statue. Besides the party of St. Gennaro let’s also remember that celebration held on November the 16th. dedicated to San Procolo. The cult for the Madonna dell’Assunta, is another very important cult. This Madonna was the fishermen’s mother, and there is a little church devoted to the Madonna in Rione Terra, and where still at present fishermen use to go there before embarking on ships; there is ritual, which consists in making a turn and then they lift in her honour water columns with the oars to be blessed. In honour of the Madonna, on August the 15th there are three days of great celebrations, popular games, religious processions and the characteristic competition of the Palo a Mare, where young people climb on a soapy wooden pole, to catch a standard affixed at the pole edge.

But Campi Flegrei are also the scenario of mythological stories, gravitating around three heroes: Eracle, Ulysses and Enea. The myth of Eracle, Greek hero par excellence, identified then by Romans with the semi god Hercules, has two important episodes:

la “Gigantomachia”, which is the fight between Zeus and the giants, when Eracle took his father’s Zeus sides, and “la costruzione della via litoranea tra il Lago Lucrino e il mare” (the building-up of the cost road between Lake Lucrino and the sea), on the occasion of the passage of Eracle (Hercules for Romans) with the herds taken in Gerone, another of his twelve labours.

The city of Baia, with its beautiful villas, was the catwalk of the “first women” of Rome and scenario of passions, loves and intrigues, which it was said, were encouraged by the pleasant atmosphere of those places. Let’s start then with the love affair of Lesbia, the woman loved by Catullo, who had also another love affair with Celio, Cicerone’s disciple, who was defined beautiful, young and loose, because she was unfaithful with husband and lovers. Also Messalina, daughter of the consul Barbato Messala, had a villa to Baia, but she married the emperor Claudio, since she was too greedy, she started to trick Valerio Asiatico, to take old of his villa, once belonged to Lucullo.

Messalina didn’t succeed and in her intent, and to have her revenge, she had him chained and brought to Rome, where he committed suicide with Poppea. Baia is also the place where Agrippina died, because of her son Nerone, who ordered her murder. The poor Agrippina as a sign of scorn had her womb pierced through. The itinerary ends-up to Cuma where, after many peregrinations, the famous Sibyl landed, the wellknown Cumana, who use to make her predictions in a cavern near the Apollo’s temple, a place that still today it is possible to visit, a place called the Sybil’s Cavern. Sibyls were virgin priestesses with the gift of prophecy, and who were anywhere the cult of Apollo existed. The history of the Sibyl Cumana is very evocative. It is told that she was so beautiful that Apollo fell in love with her, who after she had refused him many times, decided to seduce her with a gift. The sibyl asked Apollo to live as many years as those of a handful of sand grains, forgetting to ask to maintain however her eternal youth, becoming then old and decrepit, desiring death. Finally after years of prophecies, touching the clay coming from her earth of Eritrea the spell broke, and the Sibyl died.

The Sibyl Cumana had two ways of foretelling, first one was an oral ancient method, which consisted in chewing some leaves, and the second one was through magic writing, always engraved on laurel leaves, by some followers who transcribed on leaves her prophecies, she use to foretell as a terrible list of litanies. Responses were never given during the day, as a confirmation of the night and feminine nature of the myth. The Sibyl Cumana became a symbol of the myth, because she brought to Rome the famous sibylline books, a collection of sacred verses, which were consulted in moments of religious and politic crisis, and used up to the imperial period and destroyed by will of August.

In the whole area of Campi Flegrei there are different demonstrations. It is impossible to miss the Erculiadi, which take place on April and the Carnevale Flegreo. The Erculiadi are a sort of mini Olympiads, a demonstration of sport, culture and environment, in honor of Ercole, while the “Carnevale Flegreo” offers the cinema review Sotto le Stelle (Under the Stars), with puppet shows, games, and disguised groups of people.