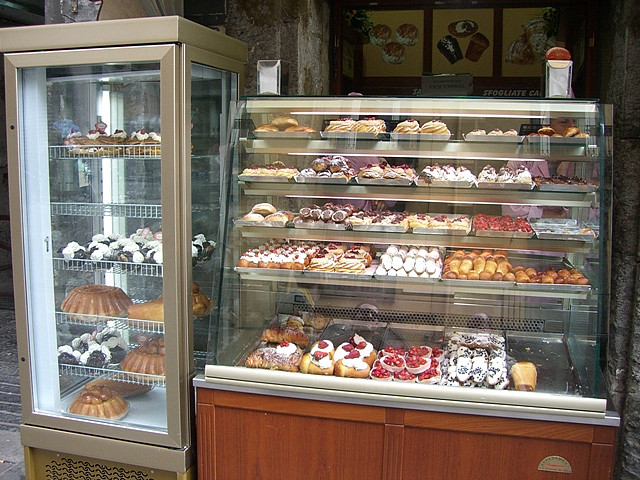 A trip through sfogliatelle (it is a typical neapolitan pastry, made with crisp puff pastry, fun shaped, stuffed with ricotta cheese, cinnamon, and spices), and babà (this is another neapolitan typical pastry, it is pear shaped – there are mignon, and big babàs, browny coloured, and soaked in rhum liquor).

A tour through Naples, with little stops in historical coffee bars, “to taste” the true coffee, following the sweet perfume of sfogliatelle (see explanation in brakeys here above), zeppole, (they are typical neapolitan pastries, they are shapeless peaces of pizza dough, fried in olive oil, they can be both salty and sweet, and stuffed with for example anchovies, or artichokes) struffoli (little round rolls, arranged in a pyramidal way, on a big dish, or tray. They are fried, and then covered with honey and candied fruit), pastiere (this is the typical neapolitan dish by excellence. This a kind of tarta, made with puff pastry, and stuffed with ricotta cheese, cinnamon, and candied fruits) and so much chocolate, between bars and laboratories where convents ancient and secret recipes have become an art.

Pastries are a very important and a greedy chapter in the Neapolitan gastronomy. They simply are the result of centuries of inventiveness and creativeness, expression of the different dominations which have followed one another in the city over the centuries, and that have also left their influences in neapolitan people.

The itinerary goes through the history of Neapolitan pastry art, and the first delight worthy to be tasted are the struffolis, typical little sweets of Christmas period, whose ancient name struggolos, which meant round body, dates-back even to Greek Palepolis times. Even during those times, a dough of flour and water was prepared, then it was cut into little bits, it was fried in hot oil and sprinkled with melt honey from the top. Still today the struffolis recipe hasn’t changed and they are sprinkled of sweet corallites and candied fruits. Another typical neapolitan sweet, of Greek origin are the franfellicchi, which are candies (Greek used to prepare them with honey, not with sugar) pulled up so as to become white and twisted.

From the Middle Ages the pastry – making confectionery have experienced a great evolution. It was inside the secret atmosphere of convents that monks and nuns experimented new whimsical recipes to cheer engagement banquets, religious parties and diplomatic meeting, for neapolitan powerful families.

This period when soft and wonderful delights were born, from the monachine (little nuns) of the monastery Trentatre (thirty-three), in Via Pisanelli, to the sapienze from the monastry of Santa Maria della Sapienza. The sapienze are very old sweets. made with honey and almonds, they just melt inside your mouth, leaving a nice taste. Let’s also remember the susamielli, from the convent of Donna Regina, with their typical S shape. Susamielli, takes their name after the sesame seeds, and also after the honey they were manufactured in the past. Then we have the santarosa, ancestress of the well-known curly and tender sfogliatelle, which took the name after the homonym convent of Conca dei Marini, on the Costiera Amalfitana. It is thanks to the famous Neapolitan confectioner Pasquale Pintauro, that santarosa’s recipe left the convent. Later on santarosa Castries will be made smaller, and lightened with the use of sour black cherries and eggs, they will then be prepared with puff pastry, and turned into the sfogliatella that today everybody can taste in the well-known place where, besides the substantial tastes, it is possible to have cartocciate di sfogliatelle (big cardboard with sfogliatelle on it, and then wrapped-up), to take away, as a greedy souvenir of Naples visit.

The tour continues with the very greedy babà, a pastry with royal origins, since it was invented during the XVIIIth century from the Polish king Stanislao Ist Leszczynski, famous for its gastronomic taste, then became a universal symbol of Neapolitan confectionery. Let’s now talk about the pastiera, the easter tar par excellence, a tart that was born inside cloisters during the Resurrection period, this is maybe the work of a nun from the convent of San Gregorio Armeno, who mixed-up ??? cheese, wheat, eggs, wildflowers water, cedar and aromatic herbs from Asia to give life to this juicy and tasty pastiera.

To the first years of the Unity of Italy belongs the ministeriale’s recipe, a delicious medallion of dark chocolate stuffed with cream. It was Francesco Scaturchio, one of first promoter of neapolitan confectionery industry, who invented this pastry, to homage the chanteuse Ann Fougez, known as the aristocrat. Nobody can tell if the pastry succeeded in conquering the beautiful courtesan, but it is true that it could conquer the Neapolitans, the royal court and, after being examined by the many ministeri (prosecutors), where the pastry takes after its name, it finally met the the king’s consent. This gastronomic tour, can just end with the commemoration of the Zeppola, another pastry that was born in a convent, the convent Santa Patrizia, whose origin would date-back on the XVIth century when sugar arrived in Europe.

This pastry can both be fried, and cooked in the oven, and can be stuffed with cream and black cherries. Zeppole are the symbol of celebration of San Giuseppe, celebrated on the 19th March. Confectionery Scaturchio celebrates the zeppola, with a party called “la festa della zeppola in piazza” (the zeppola party), and also in San Giuseppe Vesuviano, with la sagra della Zeppola (the zeppola festival).

Also chocolate and little chocolates are very important in Naples, since they are linked to the tradition and the skills of great confectionery masters, who still produce homemade chocolate, wrapped-up in very beautiful collection boxes, with the representation of the most famous glimpses of the city, like the “vesuvi” and monuments reproduced in pure chocolate, or it is also possible to ask for more tailor made shapes. It is still possible to taste, nowadays like then, the delicious milk forest, gianduia acorn, love tears, and the mythical nudes, absorbed in the intense and penetrating cocoa perfume, surrounded by a lot of people and tourists, who make in this confectionery shop, their little “sweet stop”. It is still wonderful the ability of great chocolate artisan masters of reinvent in their typical manifacture, for instance “rebaptizing” the names of the chocolates, like i tre re (the three kings), or o’ scarfalietto, a pepper chocolate, and by getting their confectionery art spreading, through short courses of cioccolatologia (chocolate subject), and guided visits.

And after so many sweets it is impossible missing a stop to drink a good coffee, the real Neapolitan cult. There are a lot of anecdotes, and poetries linked to the coffee tradition, like the monologue of Eduardo de Filippo, in the comedy “Questi Fantasmi” (Thoose Ghosts). Coffee is an important custom for Neapolitan, it is a true ceremonial, a pleasure to be tasted in loneliness or a chance to make a talk with a friend, as anciently happened in caffe storici (historical cafes). Now let’s not miss a stop at the Gambrinus cafe, one of the sanctuaries of the “tazzulella” (a cup of coffee in neapolitan dialect). This historical café, was opened on 1860, in a unmistakable style liberty, it overlooks the wonderful Palazzo Reale. This café was also the place where culture man, of that time use to meet, like the famous poet Gabriele D’Annunzio, Salvatore di Giacomo and Eduardo Scarfoglio.