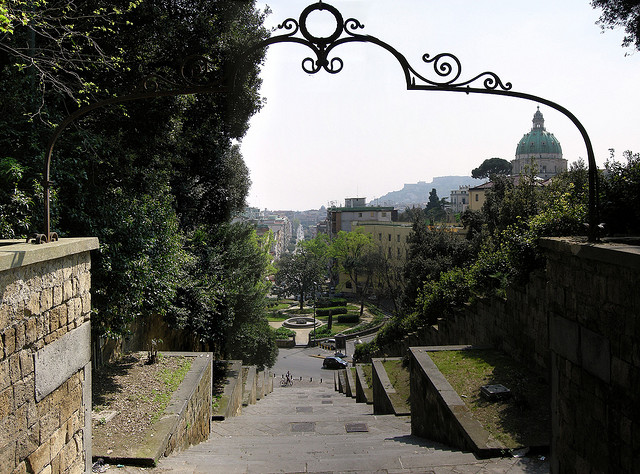 Naples is plunged into a fairy landscape, surrounded by breathtaking landscapes, such as the coastline, and of the fertile flegrea area, everything dominated from Vesuvio, painted by the most important landscapist of the XVIIIth and XIXth century, which still charms travellers, like it has been doing over the last centuries. Famous for the beauty of its gardens, which open on secret cloisters of the city, because of colors and perfumes and nobles residences dip in the green, because of its ancient beautiful gardens, and historical parks characterising its centre. Even if now Naples has become a metropolitan city, it still preserves green oasis, which not only are jewel cases of wonderful vegetation, but also of ancient pomps, and of art jewels, which can live again thanks to a great exploitation work.

The “green” tour starts from the Vomero Hill, the so-called broccoli district that was rich of gardens, and vinyards, where there is the Parco della Villa Floridiana, green area by excellence. The whole complex was built by will Ferdinando Ist of Bourbon, on 1816, as a vacation residence for his morganatic second wife wife Lucia Migliaccio duchess of Floridia. The works were entrusted to a Tuscan architect Antonio Niccolini (1772-1850), who worked in order to restructuring works of the preexisting buildings, as well as the gardens design, obtaining a fair equilibrium between the elegant neoclassic building and the English setup of the park.

Because of the duchess of Floridia was so interested in exotic animals that her villa was enriched with cages and caves for tigers, bears, lions and even of an enclosure where 18 kangaroos, obtained in exchange of 18 ercolanensi papyruses, were arranged. There re different elements that make this park fascinating and picturesque: the ionic little temple, dominating the landscape, the big meadow with maritime pines, camellias plants, which were maybe introduced in Naples for the first time, and the most evocative area of the teatrino della Verzura (little verzura theatre), arranged on a cliff elevated, at the east of the entrance avenue.

From the Vomero the parks tour continues in the wider green space outside the city of the “Parco di Capodimonte” situated on the small homonym hill to the North of Naples, called “Capo di Monte.” The park contains inside the Reggia (Royal Palace) built by will of Carlo of Bourbon, at the beginning of 1738 and whose works were finished only around the half of the nineteenth century with Ferdinando IInd when the setup of gardens and wood was concluded.

The wood was the hunting reserve of the king, and at its borders there were the areas cultivated as orchards and gardens, which supplied with fruit and vegetables royal tables. During the XIXth century, especially during the French decade 1806-1815, the wood was modeled with the introduction of zones to English garden, following canons of landscape view, and in the thirties of the Twentieth century with the introduction of exotic plants, and great palms transforming it into a park. Today Giardino Torre is the only remained of the ancient gardens, at the north-east extremity of the wood and the secret Garden that still preserves types of plants of rare fruit. The park stretches entering from the middle Door, wide area of elliptic shape, arranged in a semi circular way, crossed from side streets and five avenues, and rich in over four hundred secular plants, like holm-oaks, elms, oaks, linden trees, and chestnut trees. Inside the park, that also offers some viewpoints overlooking Naples Gulf, there are also buildings having different functions: like the cow stall, the cages area, the ancient Royal porcelain manufactur, active from 1743 to 1771, today centre of the ceramics school, Casina dei Principi of 1828, used as annex house of the king’s children, the Casina della Regina, of 1840, lodging of the mother queen and centre of parties and private receptions and the capuchins monastery.

From the hunting reserve of kings, let’s move to the Giardini di Palazzo Reale, arranged by the botanical Denhart in 1841, offering in different viewpoints, wonderful landscapes. Inside, recalling ancient pomps, you are dipped between trees and flowers in a dream atmosphere. Very suggestive it is the hanging garden of the Building, planned by the architect Gaetano Genovese (1795-1860) that overlloks on the Gulf and it was drawn according to the Italian garden style, with many coloured geometric flowerbed. From the Palazzo Reale after having crossed the promenade, we reach the Villa Comunale an ensemble of gardens stretching from Piazza della Vittoria and Piazza della Repubblica. The Villa was built between 1778 and 1780 by the king Ferdinando IV th of Bourbon, who wanted to create ahead the Riviera di Chiaia, a recreation place for the Neapolitan middle class. The place was firstly called villa Reale and for its beauty it was defined “La Tugliera” Neapolitan version of the famous real gardens “Tuillers” in Paris. The works were entrusted to the architect Luigi Vanvitelli who asked the gardener Felice Abbata some suggestion, and the project was really inspired to the Giardini alla Francese (French Gardens), with long parallel avenues, partly covered by a grillage (grid) without perspective conclusion and enriched of statues and fountains, the most famous one is paparelle fountain. The villa is full of plants, such as: holm-oaks, pines, the silk tree (specious Chorisia), and the Heaven tree (Ailanthus glandulosa), as well as cycos plant, and bushes that in spring time have wonderful colours.

At the center there is the Grande cassa armonica of cast-iron and glass, built on 1877, center of meeting and summer mundane evenings, where the orchestrina (little orchestra) used to play and spectators enjoyed the music and entertained social relationships.

Behind the villa Comunale, on the Riviera di Chiaia there is Villa Pignatelli built on 1827 on a project by Pietro Valente on behalf of Francis Acton, English gentleman and consul in Naples. The Villa is preceded by a great arcade pompeiano, conceived with ionic columns of marble and white plaster, which opens on a great meadow whose borders there are different plants of tall stem. The trees are placed along the garden perimeter and behind the villa, so as to allow a perfect sight toward the sea. The great flowerbed before the villa is separated from a narrow avenue with at the centre the great stone fountain with circular shape. Among the rarest kind of plants that make the garden a true jewel, there are: the araucaria excelsa, the specimen of Grevillea Robusta, the great Ficus Magnoliodies, the Strelitzia Augusta and palms of various type.

After having walked through Mergellina the tour leads to Capo Posillipo, where at the end of the planted avenue of the Rimembranza, there is the Parco Virgiliano, bigger than twenty hectars, built in the first half of the thirties of the twentieth century, and modified in the postwar period with the building-up of sporting facilities in the plane central area, where the sport keens can get trained in the suggestive gym in the open air. The park stretches with a series of pedestrian paths, hills and viewpoint, and it is rich in eucalyptuses, maples, oaks and olive trees. In the lowest part of the park there is “la valle dei re” (the kings’valley), where it is possible to enjoy the whole gulf sight, until the Penisola sorrentina with the possibility to observe the typical vegetation of Posillipo hill, whose tuffaceus entertain luxuriant broom plants, Indian fig trees and the aloe tree.

The last stop of the green tour is the Orto Botanico, founded on 1807 and called “Real Giardino delle piante”, one of the most important structures of botanical studies in Italy, for extension, quantity and quality of specimen, born as a knowledge tool for plants.

There are about ten thousandth of plants, among bushes and cultivated trees, thanks to the greenhouses of various temperatures and the tubs for aquatic plants that allow the growth of vegetable kind coming from every latitude of the terrestrial surface. Currently the vegetable patrimony is constituted by around 25.000 specimen of which 10.000 coming from all over the world, African, Americans and Australians deserts. The numerous vegetable collections are introduced according to three criteriae: ecological, systematic and ethnobotanical, and there is juicy area, the Mediterranean maquis, the tubs with water plants, the area of the Magnoliophytas, the orange plants. A section of the garden is devoted to officinal and perfumes plants. Among the historical buildings inside the garden there is the Moderate greenhouse of 1807 and the castle of the XVIIth, ancient rural hamlet today centre of the Museum of Etno-botanica e Paleobotanica, where there are objects coming from Philippines, Borneo, Amazzonia and Mexico, arranged in thematic showcases inspired to the different daily activities of native populations, all equipped by labels bringing the name of the plants used for their manufacturing, together with the description of their characteristics, and in the second one. there are fossils finds which with the help of a three-dimensional phylogenetic tree (2,50 mts hight and 3 mts width), explain the appaerance, the transformation process and the evolution of terrestrial plants from the Silurian period, datable-back around 400 millions of years ago, to nowadays.