A stroll to Punta della Campanella 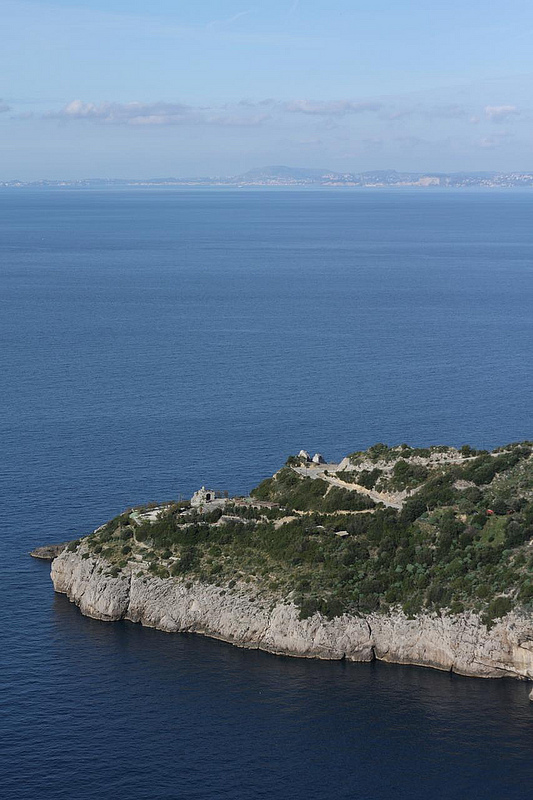 Spring is the right time for a splendid walk amid the silence of nature, along one of the many routes of major natural, historic and archaeological interest of our Peninsula: Punta Campanella.

We begin this fascinating walk from the square in Termini; easily reached by the SITA bus towards Nerano from Sorrento station. To the right of the parish church, we turn into Via Campanella and – around 400 metres further on – we reach a fork; taking the left you can reach Monte San Costanzo (another delightful place), but we take the right to begin our descent to Punta Campanella. Following a path which in many places seems to be cut from the rock, before our very eyes the landscape undergoes an incredible metamorphosis making us forget the buildings, the roads and many cars we encounter in town; the noise gradually makes way for silence and the many voices of nature … to the left the rocky white mountain with its typical vegetation, to the right the sea, the tiny bays and inlets glimpsed between the rocks.

As far as the bay of Mitigliano we can recognize the typical Mediterranean flora; but closer to the Campanella we instead see an amazing change, the vegetation is transformed into a much less luxuriant plant life, where wild olives, myrtle, juniper, rosemary, everlasting, marine fennel and the limonium which seems almost to grow directly from the rock; the sea breeze models them into unusual shapes. It is here that the herring gull nests, and in this area it is possible to glimpse the peregrine falcon or the kestrel. On reaching the very end of Punta Campanella we discern, in wild isolation, the remains of a 16th century Tower, erected on the site of a Greek temple dedicated to Minerva. This extreme outpost of the Sorrentine Peninsula, known as the Ateneo Promontory, over the course of the centuries has played host – for cult reasons or to control access to the gulf – to temples and trading stations, defence strongholds and Patrician villas. On reaching the Tower, to either side, we see two descents to the sea: that on the right, constructed in a more recent era, is still negotiable; the more ancient one, on the right, can no longer be used. At the end of this long descent – protected by a rocky stack – we see an enormous cavity, known as the “Sirens’ grotto”; it is here that the sea, reflecting the sun rays, creates a thousand colours, constantly changing. The landscape before our eyes is … extraordinary … Capri ahead, so close it seems almost possible to reach out and touch it; behind us, Monte San Costanzo, bare and rugged, and then the tiny bay of Jeranto; all so incredibly beautiful, and if we are lucky enough to be able to stay till evening, we can admire a heartbreakingly beautiful spectacle: the setting of the sun behind Capri creating a fantasy of light, shadow and reflections that perhaps even the greatest artist could never hope to capture.