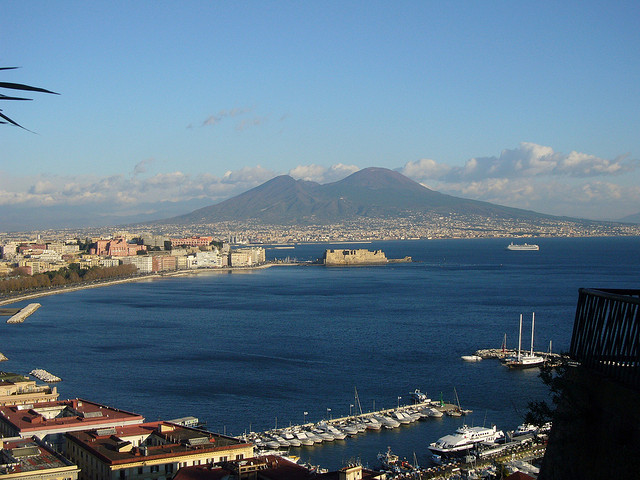 The poets described Naples as being as beautiful and attractive as a virgin, but mysterious and sensual as an odalisque. And there must have been a reason why famous artists from all over the world visited Naples as part of their training and fell in love with it. The Greeks believed that they city dissolved all worries. Travellers of the past saw it as a multifaceted land, sunny and dark, calm and volcanic, which brought together a range of western and oriental cultures. Since 1995, Naples’ old town – the largest in the world – has been on the UNESCO list of world heritage. When visiting it, one goes on an incredible journey back through 27 centuries. Castles, palazzos, villas, churches, walls, gates, palaces, excavations, parks, fountains and museums are a constant temptation for lovers of beauty. Or one can follow the advice of the travellers of the past who often forgot to visit the cultural sites, seduced by the city’s everyday charm, its viewpoints and hidden gardens, monumental squares and characteristic glimpses, unknown cloisters and tangle of narrow alleyways like a pulsating heart. Time and fashions pass, tastes and habits change, but Naples’ charm remains: a surprising mixture of nature, monuments, art, culture and folklore.

All the conquerors of the Kingdom of Naples left their mark on its language, spirit, customs and building to a greater or lesser extent. The Normans, Swabians, Angevins, Aragonese, Bourbons, Bonapartists and Savoys all ruled over Naples at one time. In order to learn more about them, there is nothing better than visiting the monumental Piazza del Plebiscito, dominated by the façade of the Royal Palace that features eight stone sovereigns representing their various dynasties. The Palace, with its magnificent, richly decorated interiors, is well worth a visit, with a very varied itinerary that includes the Court Theatre, the Throne Room, the Ambassadors’ Room, the Hanging Garden, the King’s Study and the Palatine Chapel, amongst other things. Those who prefer the reassuring and rather gloomy mass of a fortress to royal palaces (from the enchanting Capodimonte to Portia and Caserta), only have to choose between the city’s four castles: the prestigious Castel Nuovo (or Maschio Angioino), the enchanted Castel dell’Ovo, the austere Castelcapuano or the star-shaped Castel Sant’Elmo.

Naples’ old town is stratified, with later styles existing alongside earlier ones in complete harmony, in perfect, incredible symbiosis. Significant traces of the Graeco- Roman city (7th century B.C. to 4th century A.D.) survive around Piazza S. Gaetano. This was the ancient city’s forum, with its shops, temples and roads still visible today The three parallel east-west roads (Roman decumani) radiate out from here: the decumano maggiore (now Via Tribunali), the decumano superiors (from Via Sapienza to Piazzetta SS. Apostoli) and the decumano inferiore (from Piazza S.Domenico Maggiore towards Via Forcella), main roads connected by a series of alleys. This is the area where Byzantine, Medieval, Renaissance and Baroque Naples developed. Every new foundation surpassed the last, filling roads and bringing gardens to overflowing, in a fascinatingly chaotic form of urban development. But every new stratification respected earlier customs and, in a certain way, people’s habits. So, where the Greek shops once stood, the Medieval markets arose; Christian churches were built over pagan temples. And it is all still there for us to see today, as if time had never really passed…

The Historical Centre of Naples, the largest in the world, comprises almost the entire urban area. It reaches from the Capodimonte hill to the Vomero hill, stretches out below from east to west, incorporating the buildings of the Centro Antico as well as Medieval, Renaissance and Baroque constructions. Because of the wealth of its history, architecture, monuments and art, in 1995 UNESCO listed the Historical Centre of Naples as a World Cultural Heritage Site.

Besides this uniquely complex urban wealth, the city also offers many opportunities for trips to the surrounding areas, accompanied by unique oenological and gastronomical delights. Of particular interest are the craft shops at the Borgo degli Orefici (gold and jewellery), in Via San Sebastiano (lute makers), and in via San Gregorio Armeno, one of the ancient streets called ‘Cardini’, famous throughout the world for the production of the artistic Neapolitan nativity sets and characters.

Over 27 centuries of man’s uninterrupted presence have layered Naples with immense archaeological wealth: on the Posillipo hill (a theatre, noteworthy remains of villas, the Grotta di Seiano), in the area of Piedigrotta (the “Crypta Neapolitana” with Virgil’s Tomb), in Materdei (the prehistoric Necropolis), on the Lungomare (the islet of Megaride, with Castel dell’Ovo and Mount Echia, the Greek Acropolis).

The most important remains, however, are to be found in the Centre Antico, between the Decumani and the Cardini of the Graeco-Roman city, which has always been inhabited and is a unique frame of reference. This area contains Greek and Roman Walls, the Excavations of San Lorenzo Maggiore and of the Duomo (cathedral), the Statue of the Nile God, the Church of San Paolo Maggiore, once the Temple of the Dioscuri and part of the perimeter wall of the Theatre, the early Christian church where Saint Peter celebrated Mass, the Cappella di Sant’Aspreno (an ancient thermal bath building), the Catacombs.

The Decumani and the Cardini, the roads of Graeco-Roman Naples, are still practically intact and are dotted with building works in bricks of the period, but the most fascinating remains are found in the excavations of the Duomo and of San Lorenzo Maggiore.

Three different layers lie below the Duomo: the lowest is Greek, the one above it is Roman and the early Christian layer lies on the top. Below San Lorenzo there is a stretch of road, I’Erarium, with a decorated entrance and some shops, which are believed to have been close to the “Macellum”, the market of the time. Archaeological remains are to be found everywhere in the Historical Centre: the columns of the Temple of the Dioscuri in the Church of San Paolo Maggiore in the area of the Forum, the pagan Altar of the Temple of Ceres in what is now the Chapel of Santa Patriya in San Gregorio Armeno, Greek walls in Piazza Bellini, Piazza Calenda and Largo Sant’Aniello, and Roman walls in Vico Santa Maria Vertecceli. What makes archaeology in Naples unique is tJie fact that it is a “living city”, which for 27 centuries has never been out of touch with man, and where man has never for a moment stopped working.