Castles and Outskirts of Naples 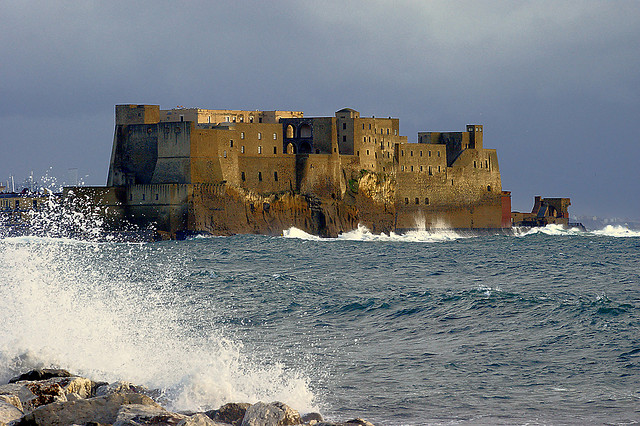 Castles built during the centuries in Naples Kingdom, have represented a dwelling place and a safe shelter for kings, queens and princes, conceived as single elements in a defense system that added to the city mighty defensives boundaries. Normans begun this kind of architecture, ordering Castel Capuano construction, and putting small fortresses on Megaride island, and on Sant’Erasmo hill. From Castel Capuano really begins a fascinating artistic itinerary.

At presenth there is the Court-house, according to the tradition it was founded by the king of Sicily Guglielmo il Malo, even if it is possible that even during Greek-Roman ages, already existed a fortified structure. During the centuries the castle has undergone a series of rebuildings, first with Federico IInd of Swabia and then with the Angevins. Angevins didn’t choose it as their only residence and so they started Castel Nuovo construction. Castel Capuano was not a royal residence anymore, so it entertained famous characters such as Francesco Petrarca, and also became the appointed place for parties and celebrations. With the Angevins it definitely lost its military side and continued to be only a place of magnificience.

The Spanish vice king don Pedro of Toledo decided to turn the castle into the Courts-huose. Even today in the castle there is the opportunity to read about the historical-artistic evolution where he was the main character during the centuries and some rooms in the castle are worthy to be visited. The Busts Room is the first worthy place to visit, its name derives from the sculptures in half marble bust celebrating the most famous lawyers of the Neapolitan Forum, which borders the majestic walls fresco decorated on 1770 on the three sides by Antonio Cacciapuoti (active from 1747 to 1770), with representations of the Personifications of the twelve Provinces of the Kingdom of Naples within perspective architectures, by Francis De Ritis and Vincenzo Bruno. From the busts room it is possible to have access to Cappella Sommaria real jewel of the sixteenh century, remained unchanged ever since, and appointed as the prayer place of Summary Presidents, before deciding which convictions to apply on subjects. Pedro Rubiales frescos are of great artistic importance, he was also called Rovinale Spagnolo (1511? – 1581), With Christ Histories and the Universal Judgment. Let’s also recommend two vaults of two civil court rooms, linked one another through two pillars, by Belisario Corenzio (1558 about – after 1640) and representing respectively Salomone Judgment of and David Judgment, both surrounded by fanlights with Virtue Allegories and grotesques.

Castel Capuano is offering since less than one year one a reason more to be visited, since it entertains, in temporary custody, sixteen paintings coming from Neapolitans churches closed to the cult for a long time. Among the most impressive works, mainly coming from the churches of San Giovanni Battista delle Monache (Saint Joseph the Baptist of the Nuns, and of Cross Discipline) and from the church of Disciplina della Croce. Paintings of particular artistic importance are L’Annunciazione, realised by the painter of Caserta Giuseppe Marullo (? -1685 ca.), painted around the 1640, la Circoncisione, realised by the neapolitan Fabrizio Santafede (1560 about – after 1628), and the great painting representing il Calvario, realised by the neapolitan Orazio Frezza (XVI I Ith century).Walking through Corso Garibaldi and arrived at Via Marina, there are the remains of another important castle, the castle of Carmine, whose construction dates-back to 1382, by will of Carlo Durazzo. This castle was built in order to consolidate the east city defense system, and it was called Sperone, for its plant conceived with this form. Built exclusively for military purposes, the castle did not show any luxurious element, it had only strong cylindrical towers, a very high tower, and external embattled walls made with strong piperno blocks. Now the castle remains are part of the central nucleus englobed in a military building and the tower “Spinella” in Marina street. In Piazza del Carmine we find the church of Santa Maria del Carmine, considered one of the most by Neapolitans revered church, and worthy to be visited. The factory was built by carmelitanis during the second half of the XIIth century, but it was restored between 1283 and 1300, thanks to Margherita of Borgogna’s donations, the second wife of Carlo d’Angiò, and also thanks to Elisabetta di Baviera, as an annex part of the church where an image of a Madonna called “La Bruna”, was revered.

The majestic bell tower flanks the church facade, and this work was made on a drawing by Giovanni Giacomo di Conforto, until the octagonal part, while the majolica tiles cusp, is by Fra Giuseppe Nuvolo (end XVIth-beginnings of XVIIth century), who worked there on 1631.

Going on Via Marina we reach Piazza del Municipio (City Hall Square), where above a hill overwiewing the harbour, it raises Castel Nuovo (New Castle), also called Maschio Angioino (Angevin Male), after its first founders, who built it as their residence. It was built starting from 1279. by will of Carlo 1st of Angiò, on a project of the French architect Pierre de Chaule and Pierre d’Angicourt. Since its foundation it was defined “Nuovo” (New), in order to distinguish it from the most ancient castles of Capuano e dell’Ovo. After the wars between Angevins and Aragonese, caused by the kingdom dispute, the castle was almost entirely rebuilt during the kingdom of Alfonso the Ist of Aragon, who asked to Catalan and to Tuscans artists to work on the different parts of the work. The construction is the evidence of the passing from the medieval Gothic style to the new Renaissance culture, so let’s not miss a visit to this castle. At first the triumph arc, placed outside in Carrara marble, with scenes celebrating Alfonso entering the city. Important artists work here, such as the maiorchino Sagrera (dead 1454). The Cappella Palatine (Palatine Chapel) and the Sala dei Baroni (Barons’ Room), are worthy to be visited.

The first one is structurally the only left part of theangevins’ factory, whose decorations were made by Giotto (1267ca.- 1337) and his pupils, called by Roberto d’Angiò, but their frescos with Histories of the Old of the New Testamentleft, are left just few evidences. The Barons’ Room, realised by Guglielmo Sagrera, is a square room covered by a octagonal goins vault. The Maschio Angioino is center of the Museo Civico (Civic Museum) whose itinerary begins at the fourteenth-century Cappella Palatina, or of Santa Barbara, which opens on the fifteenth-century courtyard. The exposition continues on the southwest castle two floors classroom. At the first floor there are works dating-back to the XVth, XVIth, XVIIth, XVIIIth centuries. Among the works there are paintings of Battistello Caracciolo (1578-1635), Mattia Preti (1613-1699) and Luca Giordano (1634-1705), as well as elements of church liturgical furnishing of the Chiesa dell’Annunziata, coming from suppressed churches and organisms as for example the Real Casa Santa Annunziata and Sant’Eligio’s institute for Education and Female Assistance, while at the second floor, there are works of the XVIIIth and XIXth century.

Going out from Maschio Angioino, continuing on the right towards Via Medina, we find three churches of historical-artistic importance: the fourteenth-century Chiesa dell’Incoronata (The Crowned Virgin Church), (closed to visitors, but open for temporary expositions) founded by Giovanna d’Angiò to celebrate her own crowning, and where are kept some important frescos by Roberto d’Oderisio, representing Bible Histories, the Sacraments and the Triumph of the Church, the church of the Pietà dei Turchini (Turchinis Pity), dated-back at the end of the XVIth century and widened in the thirties of the XVIIth century, with plant in unique aisle and side chapels, keeping important paintings as the Trinitas terrestris by Battistello Caracciolo, the Annunciation by Belisario Corenzio, the beautiful Deposition by Luca Giordano and many others and the church of San Diego all’Ospedaletto, also dating-back at the end of the XVIth century, with unique aisle with side chapels, keeping frescos by Battistello Caracciolo and various paintings like painting representing the Saint Joseph’s Transit a work by Massimo Stanzione and the beautiful altar in polychrome marbles of the XVIIIth century on drawings by Giovan Battista Nauclerio. Returning towards Via Marina and continuing towards Via Partenope, we reach the solid Castel dell’Ovo, the most ancient of the city, entertained on the Megaride islet where in ancient times part of the great villa of the brave Roman warrior Lucullo extended and that was connected up to the Echia Mountain. In the first centuries of Christianity. This area became the center of a fervent cenobitic life and took after the name of the cenoby Salvatore (Savior). Following-up different dinasties like Normans, Swebians.Angevins, etc., the island turned into a royal palace and state prison.

Seriously damaged during the 1503 siege, it was reconstructed by will of Alfonso Ist, under a bustion shape, and besides it suffered other transformations in the XVIIth century. The Castle is crossed by an uphill that offers the opportunity to observe from near some structures that show the complex monumental stratification: the room that probably entertained the cenobitis refectory, where there are five pillar rows, belonged to Lucullo villa (called the cillar room), with the monks cells dug-out in the rock, the loggiatis of Gothic and Catalan age, the Torre Maestra (The Main Tower), the tower called Norman and a circular tower as well as the ruins of the Savior church. The last castle to visit is Castel Sant’Elmo overwiewing the whole city from the hill. The castle dates-back its origin on 1275, during the kingdom of Carlo Ist d’Angio. At this stage, the castle should have had the structure of a medieval palatiume. It was Roberto d’Angiò, who decided to have it enlarged on 1329, entrusting Francesco di Vivo and Tino da Camaino. The palatium, called Belforte, had a squared shape, strengthened with boundaries and towers on the facade. The castle was reconstructed during the XVIth century by will of Carlo Vth, who asked to Don Pedro de Toledo to follow the works, carried-out according to the project of the architect Pedro Luis Escriva from Valenza, following a scheme called double pliers scheme with prominences and symmetrical indentations,for the setting up of artilleries, wide gunboats, tall walls and, deep ditch and this is the same conformation still characterising the imposing structure, even today.

The last imposing restoring intervention, was stared on 1976, by the Provveditorato dei Lavori Pubblici (Public Works Superintendency) of Campania region, and this restoring process has redelivered the castle to the city allowing the promotion of manifold cultural initiatives, an incentive for wide range programs that will find full realization only at the end of the works.

The Superintendence for the Artistic and Historical Heritage in Naples, that is dealing-with Piazza delle Armi (Weapons square) delivery, has assigned the first floor of the prison, as centre of the Art History Library “Bruno Molaioli” and the ground floor as centre of the constituting Museum of the Neapolitan View. But a visit to Castel Sant’Elmo cannot leave the visit to the wonderful Certosa di San Martino, whose first original nucleus was built on 1325 by will of Carlo d’Angiò and ended-up under Giovanna the Ist who entrusted Tino di Camaino and then to Attanasio Primario, and Giovanni Barca for the carrying-out of the works. Inside the Chartreuse, whereas there were Carthusian monks cells, now there is the center of the National Museum of San Martino, where there are many important works. The beautiful Tavola Strozzi, deserves a particular comment, since it offers a view from Naples sea side, with great details abundance.