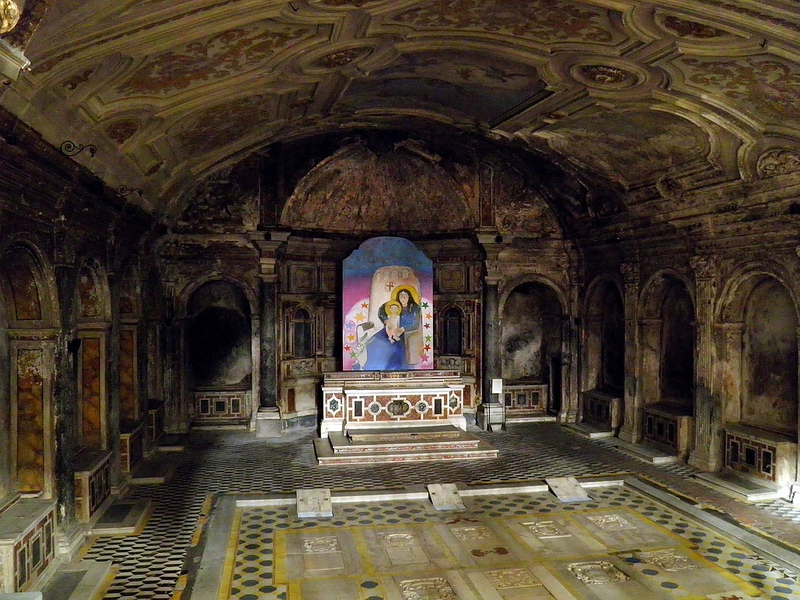 A very ancient tradition: the cult of purgative souls and Naples catacombs

Naples par excellence has always been the place where legend and tradition meet each other. Naples is the city of pizza, songs, alleys, sun and sea, and visiting them means to get in contact with a city that, despite its many problems, is always celebrating, and where everybody is ready to say hello, and to give a smile. The religious tradition here is very strong, and the feast par excellence is the one linked to San Gennaro, the patron. But another very strong tradition is linked to the cult of the purgative souls, that is to say mortal remains, and whose identity is unknown, this is why they are called pezzentelle (ragamuffin souls). Since those souls could not have nor a decorous burial, neither their belonged persons’ prayers, they wander in the purgatory, and taking care of those souls has meant concretizing the need, very rooted in the folkloric tradition of Souther Italy, of giving physical concreteness to what cannot be tangible: the soul. This tradition was born after the terrible plague epidemic that hit the city on 1656. Because of this epidemic, hundreds of bodies were left in ancient tufo mines, near the Materdei hill, which became a cemetery for poor and disinherited, and that increased over the centuries. Today this place is known as il Cimitero delle Fontanelle (Fontanelle cemetery).

The real cult was born at the end of the XIXth century when behind the mines, was built the church of Maria Santissima del Carmine, and father Gaetano Barbati, with the help of some devoted people put the thousands of bone there accumulated in order. Neapolitans, believing and hoping to find again in those remains the tracks of some ancestor, started taking care of them, by “adopting” one or more skulls, principal object for prayers. Those skulls were also named, and were also offered flowers and photos of relatives, were built some small marble or wood niches. On the other hand, those “refreshed” souls were obviously asked favours and graces, such as the recovery from an illness, and the liberation from love pains. Skulls were the real symbol of the so-called “ancient souls” and of continuity, because they are what deads have left, what belongs to the past, they are what stille is in the present. In 1969 cardinal Ursi forbade this cult, because he thought it was arbitrary, superstitious and consequently inadmissible. Nowadays it is practiced no more, but if young Neapolitans know it just because someone told them about it, elderly people know exactly the importance of this cult, full of tradition, faith, magic and mystery, and today that atmosphere can be relieved again through an unbelievable itinerary.

First stop is at the church of San Pietro ad Aram (Saint Peter in Aram), from the ancient and mysterious history, so called because, according to tradition, he keeps the Ara Petri, the altar where St. Pietro praied when arrived to Naples, baptizing Santa Candida and Sant’Aspreno, here named first bishop of the city. Originally it had to be religious a newspaper kiosk, founded for the relic preserving. The tradition told that Santa Candida had lived in the crypt underlying the church, where it is possible to have access to it, through a staircase from the left transept that after the restauration works on 1930, was discovered to be the native paleochristian church, divided into three naves. Here some skeletons have been found, and one of them was Santa Candida’s, whose skull has become worship object, and it has been laid in the little niche, located near the altar of the fourth chapel of the impending church.

Our second itinerary stop is at the church ot the Purgatorio ad Arco (the Purgatory Arc Church), which was born by will of a congregation of noble people, in order to celebrate functions voting for Purgatory souls. The name of this church derives from being near to a medieval tower, destroyed at the time of the vice king don Pedro de Toledo, where it opened an arc inside it. If you walk along the lower decuman of the city, you have to see the church, as it already presage from the outside, owing to the presence of tap-roots with skulls and thigh-bones in bronze and owing to the nearly surreal atmosphere you can breath inside of it.

The whole decoration deals-with funeral themes, in agreement with the strong cult of purgative souls, where the church rose, and where there were celebrated even up to sixty suffrage masses per day. The most famous part of the church is the underlying cemetery, cult center of the souls of the purgatory. Penetrating inside the crypt bare and cold boundaries, the contrast with the Baroque luxury of the church is very strong. But tourists won’t notice the difference because especially by entering the most inside room, he will perceive the incredible mixture of faith and superstition, testified by writings, holy pictures, flowers that, even if they now result respectively falling, creased and dry, they are the evidence of people who fully believed in this cult and who totally confided in prayers addressed to those “capozzelle” with who they use to entertain a tender conversation made with kisses, caresses and murmured confidences. In order to reach the third itinerary stop it is necessary to reach the Basilica of Santa Maria della Sanità from where you have access to the ancient cementery ecclesia, of the catacomba di San Gaudioso (Saint Gaudioso’s catacomb), bishop of northern Africa, who probably reached Naples together with other clerics in the Vth century and he was buried here. Preaching Fathers built the todays Basilica, starting on 1602, on the drawing of the Dominican friar Giuseppe Nuvolo (end XVIth-beginnings XVIIth century), englobing the little church under the greater altar.

The same canons made an accurate recognition on the place, penetrating the standing coemeterium, finding Gaudioso’s sepulchre and the Episcopalian chair. According to the tradition on this chair, actually in the church, used to sit puerperas to invoke the protection of the catacomb martyrs, so that the birth didn’t have complications. This catacomb is fascinating, full of art, tradition and legend, and from it is possible to have access to it from the crypt under the greater altar, and where is proposed a run to discover the most ancient Christian iconographie, testified by frescos still in good state of maintenance, but also by rites and typical habits. There is something here that will particularly impress tourists, the so-called “cantarelle” or “scolatoi” (drainers), which were seats dug-out in the tufo and with an exposed vase on which dead people were placed to desiccate before being deposed in an ossuary or in a private grave, but also some burials, always due to Dominicans, who see some dead persons’ skulls boxed in the walls of the ambulatory while the remaining part of the image was walled and reproduced on the fresco wall, and there were also explanatory and chronological countersigns, showing the social status of the dead one.

If for the catacombs of San Gaudioso the cult of purgative souls is certified, for the other two catacombs it is not the same: the less famous one of san Severn’s and that one of San Gennaro’s, both fascinating and full of mistery, which will definitely draw the tourists’ attention. The first one rises near the seventeenth century omonymous church, planned by the neapolitan Dionisio Lazzari (? – 1690), dedicated to San Severe (Bishop of Naples for long time during the IVth century), where it is possible to have access through the second chapel on the left. Brought to light not more than a century and a half ago, it was not possible to root also here the cult of the souls “pezzentelle”, but it is anyway very suggestive visiting this environment of few squared meters, made by two cubicles, three arcosolis and some poorer graves dug in the floor. Last stop is at the catacombs of San Gennaro, closed for long time, now the turists have the opportunity to visit them again. The catacombs are really the place most fascinating among all the places dedicated to Saint Gennaro. The catacombs are “extra moenia”, outside the old Neapolis walls because,according to the customs of the classic world, the dead were buried outside the town walls. The catacombs go back to the 2nd century a.C. and perhaps they rose around an old noble sepulchre given to the Christian community which transformed into official cemetery area.

During the 2nd century a.C., in this area, Saint Agrippino – first patron of Naples – was buried and worshipped, and after two centuries it was the turn of tha martyr Saint Gennaro, where the remains of the saints were moved from Pozzuoli. Catacombs extend on 50.000 squared metres, and being them dug-out in yellow tufo, it was possible making bold architectural structures, which have allowed the carrying-out of big ambulatories. It is a structure particularly interesting because its run is still nowadsys articulated by the presence of paleochristian paintings which contribute to make this place one of the most fascinating places of the “underground Naples”, a charm that increased by knowledge, handed down by ancient sources, that in the city there are other catacombs, unfortunately not yet brought to light. Among these catacombs there are: the catacomba di San Vito (Saint Vito’s catacomb), the catacomba di Sant’Eufemia (Saint Eufemia catacomb), the catacomba di San Fortunate (Saint Lucky’s catacomb) (both located near the alley of the Lammatari, rione Sanità and the catacomb of Saint Eusebio (behind the Botanical Garden). Only of this last hypogeum is visitable a gallery.