Artistic and Archaeological Goods in Sorrento 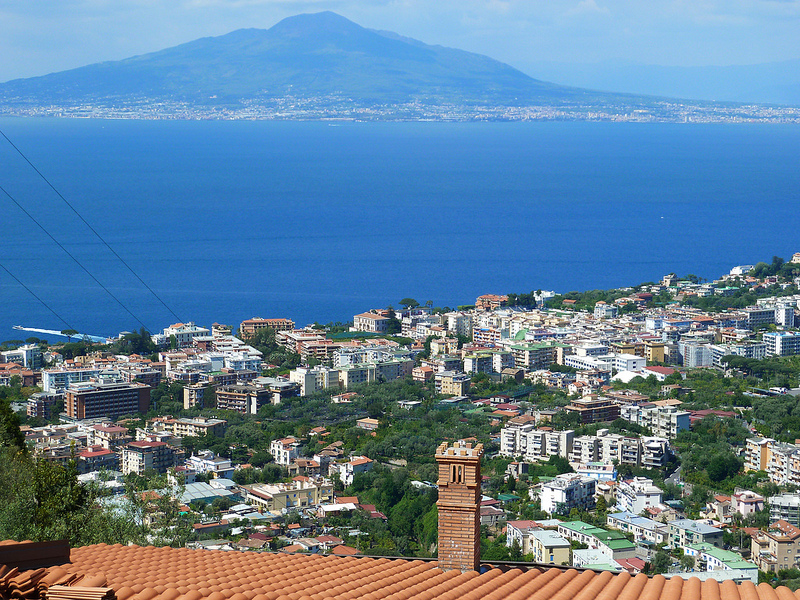 Crossing the road leading to the Sorrentine Peninsula, the first town we find is Vico Equense situated on a rocky promontory falling vertical into the sea, stretching from Scrajo to Punta Scutolo. Since the first years of the Christian era, this place was an Episcopalian center and among its lords, we find Monsignore Michele Natale, martyr of the Neapolitan Revolution on 1799. The piccolo Antiquario Equino (the little hourse antiquary), is worthy to be visited, since there are many archaeological finds (around 700 pieces) mainly part of a funeral furniture, coming from the necropolis of the VII-VIII century B.C., found inside the same town. Samples of attic vases are very important, as well as italiota and buccheri ceramic, but the most important registration is of etruscan origin, dating-back to the VI century B.C., representing an alphabet of etruscan origin, important fragment for the interpretation of this language.

Crossing Via del Vescovado, it is possible to reach the former Cathedral, or Chiesa dell’Annunziata, the only example of sacred archiecture in Gothic style of the Sorrento Coast. The church was erected by the will of Bishop Giovanni Cimmino, whose beautiful grave with an ancient pluteus at its lower part, and an even more ancient winged horse, are preserved inside this church, considered a very important historical evidence, like the grave of the famous Gaetano Filangieri. Once the church was completely frescoed, but today there are just two frescos left. representing the Crucifixion and the Saints. The Catalan Courtyard, is an evidence of the medieval period, located in the quartiere vescovado (Bishops Area), where it is still possible to see the section of a patio in Catalan style of the XVth century. Continuing the tour there is the picturesque center of Meta di Sorrento, accessible by crossing a tunnel leading on the only access road to the peninsula, the bridge of Seiano.

Some road plans are imputable to the Greek-Roman period, as evidenced by the existing installations among Stabia, Pozzano, Vico, Meta, Piano. The city of Meta, was attacked by Saracens during the IXth century because of its maritime nature. The city of Meta, like Piano di Sorrento belonged to the Dukedom of Sorrento and was ruled by the Noble Seats up to 1819 when it finally got the autonomy, following as result the Bourbons abolished the Seats after the Neapolitan revolution of 1799. The church of Santa Maria del Lauro is of great artistic relief, and rich in history since it rises on the remains of an ancient temple devoted to Minerva god. At the beginning, the church was devoted to the Salvatore (Saviour) until when, at the beginnings of the XIIIth century a woman recovered a statue of the Virgo near a laurel tree. Ever since the church was devoted to the Madonna del Lauro, whose statue, dating-back on 1588, is located in the right aisle of a chapel rich in beautiful marbles.

Currently the facade is in neoclassic style flanked from a bell tower in Baroque style. Sailors ex-votes are of strong impact, since they occupy the whole walls of the basilica. Taking the via del Lauro, it is possible to reach the Chiesa degli Angeli Custodi (The Church of Guardian Angels). Continuing for Via Caracciolo, through little streets and very suggestive alleys, there are villas and buildings of Baroque epoch, such as: Villa Liguori, Palazzo Fienga, Villa Lisa, Palazzo Maresca, Villa Giuseppina, Villa Valletta Martini. A few kilometers from Meta, there is another characteristic maritime town, Piano di Sorrento whose history dates-back at the neolithyc, as evidenced by some recoveries found again in the cave of Matera. The history of Piano was linked during a long time to Sorrento’s. During the IXth and Xth centuries it was the most important episcopalian center, and a free dukedom. Piano desire of autonomy lead to a revolt on 1648, a revolt which didn’t end-up successfully for the small center, which became independent from Sorrento only in 1808, becoming an autonomous town. The actual boundaries have been defined on 1861 and on 1865 when it respectively separated from Meta and Sant’Agnello.

Among the most important artistic sites, do not miss a visit to the Basilica della Santissima Trinità and to the Basilica di San Michele. The presbytery encircled by a rich marmoreal baluster adorned by four angels carrying marble candles, is worthy to be visited, and it was attributed to the Bernini’s school. In order to understand the territory, let’s not absolutely miss a visit near Museo Archeologico Territoriale Georges Vallet (Archaeological Territorial Museum Georges Vallet), which through the preserved finds, it gives evidence of the different phases of population and transformations of the peninsula, from prehistory to the Roman age. The first archaeological museum of the peninsula, rich in didactic and multimedia supports, offers to visitors a heterogeneity of objects, such as: arrows ends of neolithic era, little jugs, examples of sculpture, archaic architecture and many others.

Now we have reached Sorrento, the destination tourists longe for the most. Presumably Phoenicians already lived there, it was a Greek colony and then a Roman’s, one even if it had often rebelled against Rome, without being never destroyed and, during the imperial age, it became the privileged residence of Roman nobles. Also Sorrento suffered different raids, like the Goths’, the Longobards’ and the Byzantines’, until during the IXth century it became a dukedom, and finally, on 1133 it was conquered by Normans. In order to defend itself against Turkish soldiers’ attacks, during the half of the XVIth century, the city had to build defensive boundaries, following the ancient Roman layout. On 1799 it became part of the Repubblica Partenopea, but at that time, it started to become a place for vacations, like it is today. The whole city is worthy to be visited.

Its historical center has the usual Greek-Roman layout, with parallel roads, around the greater decuman in Via San Cesareo, and to Via Tasso pivots. The city partially preserves its original plant, while part of it was modified because of Corso Italia main road building-up, which was built at the end of the Nineteenth century, and which crosses Sorrento from side to side. The starting point is the shining Piazza Tasso, where there are two beautiful statues of Sant’Antonino, by Tommaso Solari (1820-1889), and also the monument to Torquato Tasso, by Gennaro Calì (1799-1887) of 1866. The church of Santa Maria del Carmine overlooks the Piazza, while, southwards there is Casa Correale, dating-back at the end of the XVth century, but rebuilt on 1768. On the back wall of the courtyard there is a beautiful majolica decoration. Taking for Via Pietà (Pity), we find two of the most ancient buildings of the city: the thirteenth-century Palazzo Veniero, characterised by its yellow and tufo grey decorations, and Palazzo Correale dating-back to the XIVth century, even if the only medieval elements preserved here, are the durazzesco portal and two elegant ogival double lancet windows, at its center there is the Correale family coat of arms, and a “walnut-tree point” single lancet window.

From Via Pietà we reach the wide Archpriest where there is the Cathedral, which was rebuilt in the XVth century on an ancient cult place devoted to the San Filippo and San Giacomo, but it that was restored many times. The Gothic shapes facade is modern (1924), but the pronaos with two Roman columns and the marble portal on a side, dating-back to 1478, are very interesting. Continuing on Corso Italia there is Via Sersale with its eighteenth-century Congrega dei Servi di Maria (Congregation of Mary’s Servs), accessible from a marble staircase with a double ramp, where the ancient chapel of S. Barnaba was located. The Sedile (Seat) Dominova, a rare evidence of ancient noble seats, is situated in the homonym wide stretch of road. This place dates-back to the XVth century, and it looks like a lodge with closed arcades on two sides by balusters, while the other two walls are frescoed. It is entirely decorated with allegories and with an architectural trompe d’oeil of the XVIIth century, and it is crowned by a sixteenth-century dome in majolica.

The beautiful statue of 1879 is located in piazza Sant’Antonino, (just being restored). The statue is dedicated to the saint and was sculptured by Tommaso Solari (1820-1889), and there is also the homonym basilica that rises on a place where before the IXth century it was built an oratory on the sepulchre of Sant’Antonino.