Alternative Itineraries Along the Paths of the Sorrento Coast 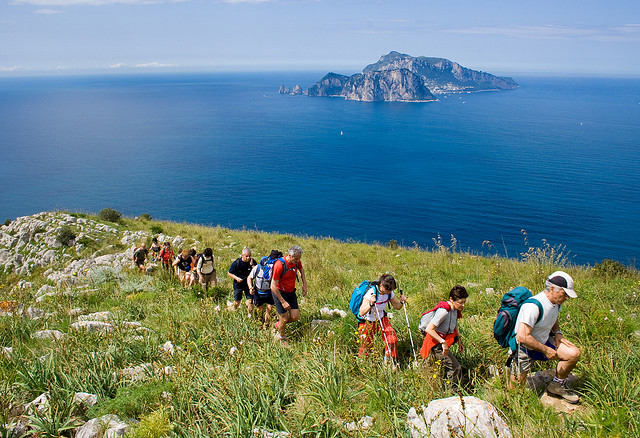 Those kind of itineraries are offered both by WWF, and by Italia Nostra (Our italy), but also by Giovanni Visetti, a local hiker guide (associated with the AIGAE from 1997). Giovanni Visetti knows very well ali the paths, the coasts and the suburbs not only of the Sorrento Coast, but also of the Amalfi Coast, of Capri and of the Monti Lattari. Among the itineraries WWF recommends most, there is the Mala Coccola, from Colli di Fontanelle, hamlet of Sant’Agnello, to Sant’Agata on the two Gulves, to the panoramic road Nastro Azzurro. Then we have Percorso Punta Sant’Elia, which from Piazzetta di Colli di Fontanelle crosses via Belvedere up to the Are of Sant’Elia, the destination of the famous Grand Tour travellers, and then crossing its gale, until located under the relief of the Malacoccola, not far from the terraces where Norman Douglas wrote The Mermaids’ Land, and an ideal point for the birdwatching. It is an activity to do outdoor and its aim consists in the observation of wild birds. At this point it is possible to enter an involving dimension, definitely the best way to learn how to know and love the natural world. Very important things we suggest you to take with you during those tour, are a good guide book,a binoculars and… so much patience.

After Punta Campanella, your eyes will be enticed by a stack calied the “Scuoglio d’a Campanella” (Campanella rock-cliff), where there is the Grotta Salara, also known as the Mermaids’ Cave, whose name probably derives from the fact that it was a place where it was possible to pick up the sea salt, which, after sea storms remained inside the puddles still present today inside the cave. Up about thirty meters from the cave there is the Grotta d’a Suppressata, (The Cave of the Suppressata, a kind of sausage typical of Southern Italy) whose name derives from the fact that inside the cave there are many stalactites who look like that kind of sausages. Starting from Punta della Campanella, there are many of the so called poste, places of the coast where fishermen could find the place where nets were cast, creels or maintops were lowered. Let’s quote then some of the caves: ‘a Seggiolella (little chair), ‘o Vitiello (the calf), ‘e Senghe’ ‘e fora. ‘e Senghe ‘e Terra, Scuoglietidli. sotto ‘o Mierolo (black bird), ‘a Ponta’ e l’Acqua, Chiano Piccio. Sotto ‘a l’Acqua. ‘a Ponta d”a Femmena. sotto ‘a Femmena. dint” o Rivo, e ‘a Ponta d”o Rivo.

The second inlet is sheltered from a big oblong rock-cliff that surrounds it at east, leaving a very ample passage. The narrowest passage is also practicable without any difficulty, even with rough sea, and leads in front of the entry of the Grotta Zenzinada, the biggest cave of the Baia di Jeranto. This cave, currently known with the name of Grotta del Presepe (Manger Cave), penetrates the rock for more than 20 meters. In the left side of the bay the wall is less steep, but it’s always steep. This part of the bay is commonly known as Ieranto Grande, but there is also the local place name ‘nterra’ ‘e Renare. In front of this second part of the beach, the greatest rock-cliff is called Pila d”a Marina. Not far away from the beach, there is a little cave with a very low entrance, and it is possible to have ones way through it by swimming, and inside there is a room with a round shape. This cave has a second underwater entrance, consequently with the low tide, it is also possible to go though it without having to dive.

The cave takes its name by the promontory in which it is inserted, whose name is Capitello, a name probably coming from the dialect word capitiello, meaning nipple. A few meters ahead we double the Ponta d”o Viecchio, or Punta di Capitello, the end of the promontory which splits the big beach from the so called Ieranto Piccola, or also Marinella, perhaps more beautiful than the first one, since it lies between light calcareous rocks, and because the floor and the beach are covered with very white stones. The small peninsula where Torre di Montalto rises, closes the bay at west, and it is called Punta di Ieranto. On the right of the smaller inlet we still find the dock built overhanging the sea.

The Museo mineralogico campano (the mineralogical museum of Campania), is particularly interesting for children. The museum houses one of the most important collection of scientific mineralogy of Campania, for number, rarity and variety of the around 3.500 exposed minerals, coming from all over the world. Children will have the chance to visit the many showcases displaced in the rooms arranged on one floor, and they will definitely be charmed by the vesuvian rocks – such as the lapis lazzuli from Monte Somma – and the many meteorites, among which there is specimen coming from Texas, and dating-back to 2.600 years before the arrival of Christ. One showcase is dedicated to fluorescent minerals, which under the ultraviolet light assume garish colors, from green to yellow, from blue to violet. It was recently opened a section of gems, some of them are row, others are cut, polished, and will definitely catch little girl’s attention. Let’s not miss a stop in front of the showcases preserving the magnesium nodule collected in the depths of the Pacific ocean, and the tugtupite, a mineral from Greenland discovered 30 years ago.