Rites of the Holy Week under the Vesuvius 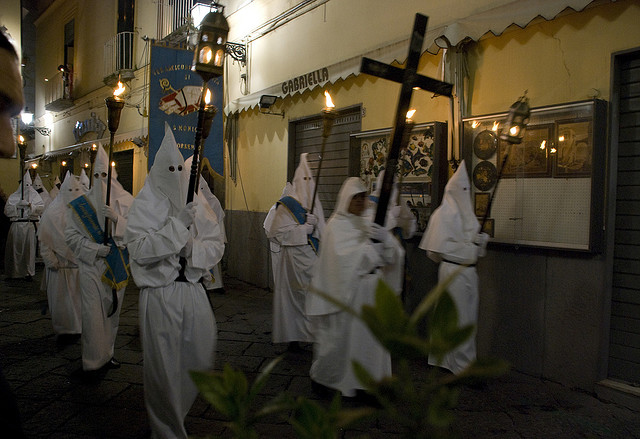 In Campania Easter is a rich and interesting occasion to visitors for its characteristic processions during the Holy week. This tradition goes back a long way, to a Christian use in medieval times and in some cases there are testimonies dating back to the XVI century. Sorrento and its outskirts, the isle of Procida, Somma Vesuviana and Acerra are the places where the processions keep their most intense pathos and at the same time become important events under a social and cultural point of view. The long parades of the hooded is followed by a huge crowd which is deeply involved in the symbolic pathos of the scenes representing Christ’s death. Along the coast, Sorrento stands out for the perfect organization of two processions on Good Friday, the white and the black ones. The first, with white hooded men, organized by Santa Monica Confraternity, takes place on the night between Thursday and Friday. The procession walks in front of .the statue of the Our Lady searching her Son.

It is the suggestive prelude to the other procession, organized on Friday evening by the Death and Adoration Confraternity in which both the robes and the dress of the Holy Mother is black, a colour representing the painful finding of her Son dead on the cross.

The whole town and the atmosphere all around arouse great emotions. Now a question everyone would ask is: why a town which is today one of the international capital of tourism, lives so deeply the drama of Christ on Calvary? The answer is only possible if you have the occasion to follow the processions, because you can understand it is a real proof of faith and deep attachment to traditions. “ My Lord remind me I’m a sinner” this is the real spirit by which the hooded men get ready and cover their faces before processions. The participation to these processions is motive of pride for Sorrentinian above all for the voices of Miserere which start to train two months before. The brethren want to be prepared with their liturgical carols, to follow the hooded carrying torches and all other symbols of Christ’s passion: the basin, the jug in which Pilate washed his hands, the bag with the money paid for the betrayal, Peter’s knife with the cut ear, the rooster which reminded Peter the triple denial, the column with ropes by which Christ was tied.

The shields, the thorn crown the gown and the cane with which Christ was mocked and proclaimed king of Jews, the nails and the pliers for His crucifixion, the lance which rap his heart and finally the big cross with the hanging shroud. All these details, studied with almost maniacal attention, show the real meaning people have been giving to processions since 1586, when the confraternity of St Catello, born at the end of ‘300, asked for the aggregation of the Roman confraternity “ Death and Adoration”. On this example the black hooded started to parade on the Good Friday instead of Thursday. In 1600 new “mysteries” were introduced, because of the Spanish influence ruling in the Neapolitan Kingdom: the Spanish viceroys, on the Fathers Jesuit’s suggestion, imposed the new kind of processions, richer in symbols.

In Procida two thousand people, all dressed with a white habit and violet cape, take part to the procession on Good Friday. The deep pathos and feelings incite young people to work late in the night, to build the symbols of passion, in the entrance halls and front yards of the oldest building on the island.

On Thursday there is the procession of the hooded apostles, organized by the White Congregation. Thousand of tourists follow the long characteristic processions in the streets.

Four centuries of history boasts the Via Cruces in Somma Vesuviana, organized on the evening of Good Friday, with a very long parade of about two thousand people, following the Madonna of Dead Christ. In the little town at the foot of the mount Vesuvius, the tradition dates back to 1630, once again Spanish introduced it.

In Acerra the procession on Good Friday is really spectacular with its three thousand torches, lit all around the baron castle, and taken there by black clothed women.

On the notes of the Hymn to Maria Santissima Addolorata, sung by three hundred young female voices, the procession goes around the town. The parade starts in the early afternoon from the main square “Piazza Castello”. People wear typical costumes representing eight scenes of Passion. At the head of the procession, the representation of Christ’s arrival in Jerusalem, the Last Supper, the betrayal, the sentence to death and the crucifixion.

The procession of Acerra, which recalls many people also from the nearby villages, ends up at about 21.00 in the same square: here is performed the scene of Crucifixion with the two Thieves. The confraternity of the Suffrage organized the performance, enriched with new scenes in the 1970s, for the first time at the end of the 19th century. The text of the Hymn to Maria is taken from the XII and IV scene of the Via Cruces and was composed by Saint Leonardo di Porto Maurizio, while is still unknown the author of the music.

Festival, tradition, deep attachment to roots, Campania still preserves its special attitude of people to dramatize feelings linked to penance and death. The processions, the songs and prayers show people’s deep religious faith. During the Holy week, the long processions represent human wander in the world and the desire to elevate oneself and expiate sin. In the centuries many traditions have disappeared because the way to be Christian and to live religion has changed. Sorrento and all the mentioned villages have been able to preserve the true involvement to the Holy Week liturgy. The processions have become a moment of aggregation and meditation as well as an important attraction for tourists.