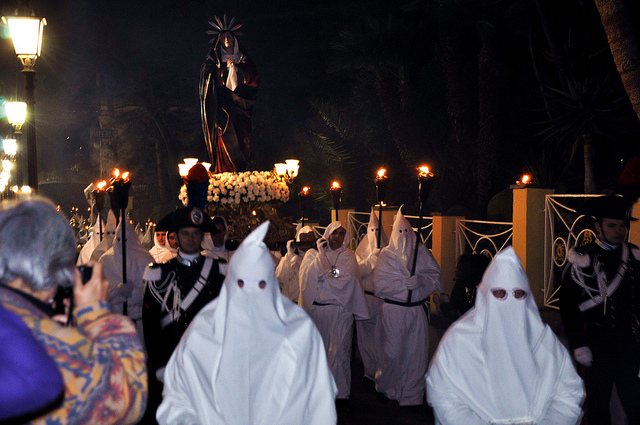 Whoever visits Sorrento during the Easter period has the chance to see one of the traditions which is most deep-rooted in historical memoirs, repeated year after year: the procession of Maundy Thursday and Good Friday.This tradition goes back a long way; there are testimonies dating back to the 1500’s of simple processions: a few religious monks walked the streets of the city carrying a cross between two lances, singing psalms.

Only towards the 17th century, the influence of the Jesuits embellished the processions with lamps, torches and standards.The White procession, starts in the middle of the night between the Thursday and Friday before Easter, and it is organized by the Santa Monica Main Confraternity. It takes its name from the color of the robes that the participants wear, in majestic silence, hiding their faces under their hoods. The tradition recalls the wandering of Our Lady whilst searching for her Son, captured and sentenced to death. The night of Good Friday – after the evening liturgical functions – the members of the Santa Monica Main Confraternity start the Black procession: it is Our Lady who has finally found her Son dead on the cross.

Dressed in habits and black hoods, the men walk silently and solemnly in front of the statue of Our Lady and the simulacrum of Christ carried on their shoulders.Sorrento is in complete silence. Lights go out, shops close their shutters and the hooded monks proceed with their slow and decisive march, merging with the darkness of the night, slightly illuminated by languid torches; whilst crosses, standard and poignant songs recall age-old traditions which faith has passed on from generation to generation over the centuries. All of a sudden the silence is broken by the notes of Wagner which recall to everyone’s mind the desperate death and passion of Christ.

One of the most profound moments is the echo of the 200 singers of Miserere which like a sword cuts into the moving silence and makes the words of David’s psalm transform into a single cry of prayer.

Sorrento Info suggestion: Above all do not miss the Black procession, which is particularly suggestive. For those who admire Churches, we suggest you visit them during the day before Easter, you will be able to admire another ancient tradition: the sepulchres, wonderfully prepared in every church.