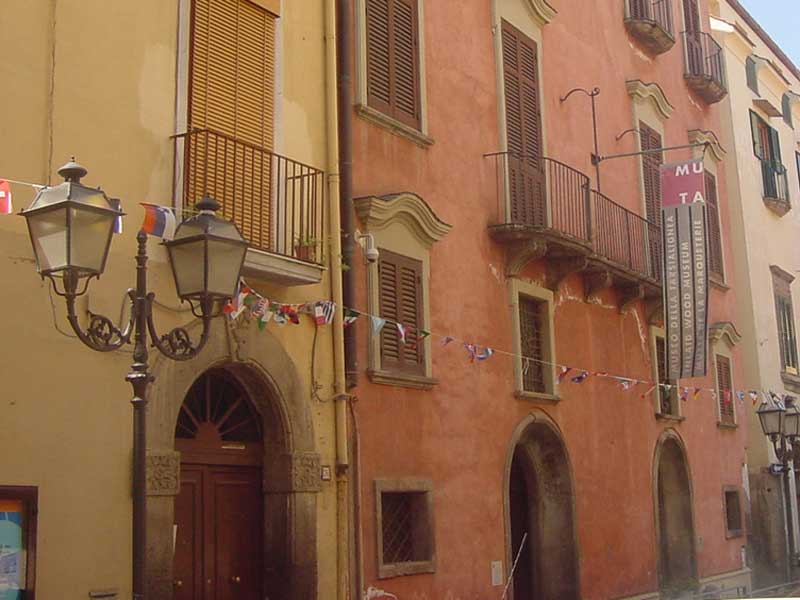 A NEW MODEL OF MUSEUM FOR THE DECORATIVE ARTS

The building that houses the Museo Bottega stands on via S. Nicola and is part of an ancient urban area. Its 18th century structure is typical of a provincial townhouse with more consequential pretensions. The Museo Bottega is a poly-functional structure designed to re-qualify those sectors of the decorative arts which have not only a past worth of being recorded, but also a productivity which needs to be sustained and helped to renew its contents. In the structure, the catalogue and display of the historical production serves as the introduction to a more ample program going beyond the conservation of the Sorrentine Heritage. There is a need for training programs in the specific sectors of craft activity, and an autonomous production based on the techniques and materials which represent the best in the tradition of each craft..

It is introduced by the exhibition of objects and furniture produced in the 19th century which focuses on the technical and decorative characteristics of the various inlaid wood workshops then active in Italy. This is designed to give to the visitor a better understanding of the specific features of the craft as it was practised in Sorrento. The exhibition of local ware is preceded by an extensive selection of paintings, prints and photographs of the setting for this local craft. Different sections in the Museo Bottega illustrate the evolution of production techniques, the materials used, the decorative motifs and the details of design which characterize the local production in inlaid wood. After recognizing the part played by the local School of Art in training successive generations of craftsmen, the exhibition concludes with the 19th century work of local masters.

The main objective of the Museo Bottega is to ensure continuity for the tradition of inlaid wood work in Sorrento by commissioning and marketing products reflecting a cultural renaissance in the craft. It has been many years since the artisan represented a composite figure uniting manual skills with design acumen, once the secret of his success. The only way to avoid the degrade of the various sectors of the arts and crafts seems to be a field expert in the culture of the craft during the structuring and concept project. The production of the Alessandro Fiorentino Collection is the tangible result of such collaboration. Inlaid Wood work has always been considered a decorative addition to the item to which it was applied, whereas production here has been based on a new equilibrium in which the finished product is a univocal expression of formal structure.

In the era in which technology has invaded all sectors of production, traditional skills have had to meet a severe challenge: some have disappeared, many have modified their systems of production, and precious few have remained faithful to traditional techniques. The modern production of inlaid wood work undertaken by the Collection of Alessandro Fiorentino has swum against the tide by reaffirming the manual skills and traditional techniques of inlaid wood work. The collection has concentrated on two distinct sectors: the more traditional one of common place objects focused on the museum marketing and that of interior design. It made its debut at the International Design Center in New York in 1988, during the AIA Convention. The projects of Alessandro Fiorentino have been accomplished with the collaboration of local craftsmen and the project concept contribution of his three sons, all qualified architects: Luigi, Paolo and Fabio.

Sorrentoinfo.com suggestion: Sorrento is traditionally known for its inlaid wood work. This museum is an opportunity to understand this interesting detailed art on wood.