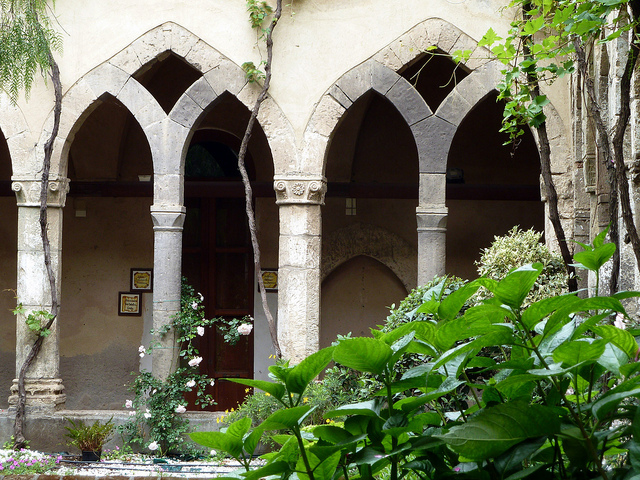 A few metres from Piazza Sant’Antonino, where the Basilica dedicated to the patron saint of Sorrento stands, in Piazza Francesco Saverio Gargiulo – in the vicinity of the Villa Comunale – rises a historic triptych set in a volcanic tuff wall known around the Peninsula Area as “conventual complex of San Francesco d’Assisi”. The elements which characterize the triptych are: the Church, the Monastery and the Cloister.

The Church, which dates back to the XIV century, is a triumph of baroque style with rich stucco decorations. This church is a cradle of precious “treasures of our memory” like a majestic wooden main door of the 1500’s, two frescoes from the 700’s portraying Sant’Antonio of Padova and San Giacomo, which returned to light during a restoration work in 1926, and a splendid wooden statue of San Francesco with Christ Crucified. In 1992, on the outside of the Church, a bronze statue representing San Francesco has been placed, created by sculptor Alfiero Nena.

Near the Church, a Monastery is erected, founded in the VII century, given to the Franciscan monks in the XIV century, and a beautiful Cloister.

The Cloister is a perfect fusion of different architectural styles, on two sides of the porch we find crossed tuff arches, stylistic expression of the late fourteenth century; instead, on the other two sides impressive round arches on octagonal pillars are erected.

The attentive eye can notice the presence of numerous elements of spoils coming from pagan temples, skilful and architecturally integrated and used as corner pillars.

During the summer period, the Cloister is transformed and becomes the background for works of art exhibitions and of the Sorrentine Musical Summer, an extraordinary continuation of appointments bound to music with the presence of artists coming from all over the world.

Rich with flowers, plants and ornamental trees, the Cloister is almost a place of tales, with its typical arch structure and the melodious chirping of the birds that in the spring elect this spot as their favourite residence, seems to transport visitors backwards in time, in an antique tale of the Arabian world.

Visit it on a splendid, sunny day. In the shade of the porches or under a tree, you can savour all the magic of a place enveloped in silence, coloured by stupendous flowers made brilliant by the sunshine and rich in scents which mingle in the air.