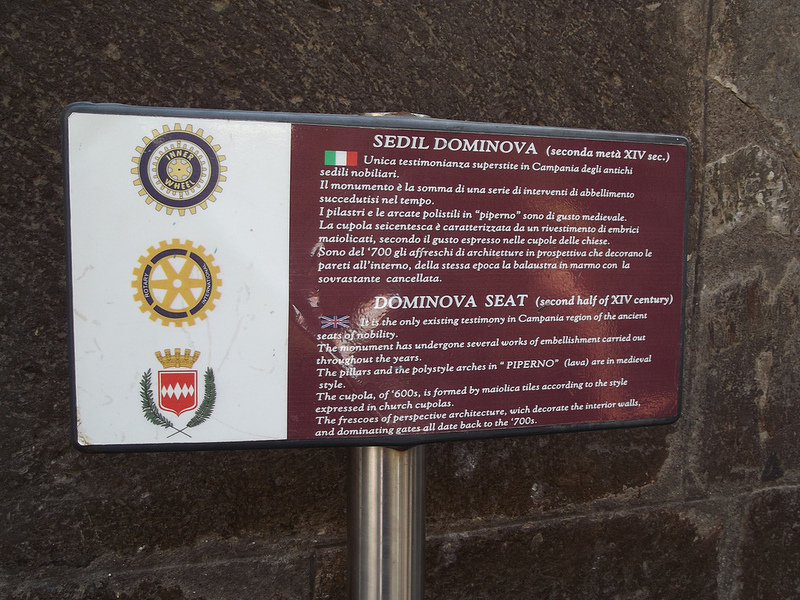 Where the remains of the Ancient City Walls are, there lie the monuments, churches and the testimonies of antique civilizations; walking through the streets of the historical centre, the antique Greek-Roman structure is still legible, memory represented vividly in via Pietà, via S. Cesareo, via Padre Reginaldo Giuliani and via Tasso.

Along these old streets, small dim lights aligned on the walls of tuff reveal the treasures and tell the secrets of the historical centre.

Via Pietà, in the old major city zone – called as decumano maggiore in Italian, timidly exhibits the Arab-Byzantine decorations of the Veniero Palace and the Correale Palace with its majestic courtyard with majolican tiles of the 1700’s.

Along the other zone (decumano) – via S. Cesareo – it is possible to admire “Sedile di Porta” and “Dominava”, where the nobility of Sorrento reunited; inside the City’s coat of arms and those of the local patrician families are portrayed. Its majolican (glazed pottery) tiled dome dates back to the 1600’s.

Continuing along via P.R. Giuliani and via Tasso, the portals of the antique noble homes, designed in Catalan style, appear majestic. It is between these streets that, at dawn, a scent of bread and sweets just taken out of the oven is diffused; and as the moon slowly gives up its place to the sun, voices are multiplied and mixed with the murmurs, footsteps and the thousand colours of the marketplaces that cheer up the historic centre daily; and then…the odour of the glue and the typical noise of the saws, planes and hammers that pronounce day after day, year after year, the patient and precious work of the masters of the Sorrentine inlaid wood work, an art born between ‘700 and ‘800.

The Cathedral, with its inlaid wooden chancel, the Basilica of Sant’Antonino with its pulpit and the Museo Correale with the Saltovar collection, jealously, preserve the memory of the old masters of inlaid work, incomparable artists of wood.

Then, there is the Chiostro di San Francesco(Saint Francis Cloister), splendid medieval monument with 14th century arches, and in the immediate vicinity stands the “Casa Fasulo” where Torquato Tasso, an illustrious Sorrentine poet, found hospitality.

From the centre of the city, continuing along via Correale, you reach the Museo Correale of Terranova, which preserves paintings, porcelains, majolican tiles and an entire section dedicated to inlaid wood work.

The centre of Sorrento is extremely rich, each alley, shop, church and building, has a story to show and tell. Each corner hides a legend to be narrated and findings to be admired just waiting for visitors “hungry” for history and culture, to be satisfied.