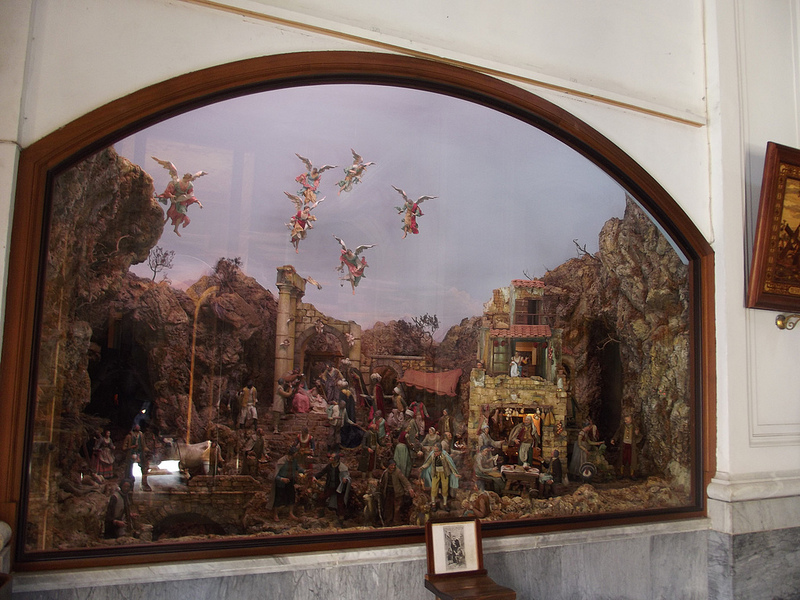 The advantage of the nativity crib in southern Italy, in particular Naples, is that it clearly expresses the idea of the Nativity with its reverent and collectable nature, but also admits social and traditional implications. A key to the reading of modern day nativity cribs, those designed with artistic intent, not merely artistic in appearance, leads us to consider sociological and anthropological aspects since it reveals the nativity crib as a document of life, with social elements expressed in all their diversity, in the roles covered by each and highlighted in the various arts or trades performed. To recollect the fashion of Neapolitan nativity crib tradition in the 18th century, a period marking a secular change of direction in terms of religious representation, the rocks propose scenes of everyday life, illustrating trades which time has inevitably changed leading to their disappearance or transformation into similar business, the popular and daily life in the home and streets, the shops of an imaginary village not lacking in references to local facts and the oldest traditional activities.

With carefree anachronism it presents its own true and historic experience of the world, betraying indifference to the specifics of ritual celebration with its officious giving of thanks, ethical and religious admonishments and yuletide wishes. If the Nativity scene role remains unchanged as an ideal fulcrum upon which the various external scenes converge, it is the latter that present considerable diversities. There is the hand-powered oil press for producing olive oil, with jars and vats to contain the golden Mediterranean condiment; the miller at his mill with grinding stones for the wheat, and the baker placing his bread in the woodfired oven and a fine array of the various loaves redolent of lost traditional flavours. There are more examples of forgotten trades, swallowed by modernization, or activities that time has transformed.

The knife grinder, the woman selling vegetables from a cart, the travelling fruit and vegetable seller, the wagoner with his load of barrels, the greengrocer, the fishmonger with his attractive crates of fresh fish, the butcher with his wares hung at the shop entrance (pork, rabbit, goat, poultry) not only to attract, but also to guarantee to the customer the quality and freshness of his products. There is the water vendor wandering the streets with his cart full of jars, a figure that no longer exists, living in the memory of those who perhaps encountered the water vendors who, until the 1950s, came to our streets to sell Acqua della Madonna from Castellammare di Stabia from his brightly coloured cart.

Sorrentine shepherds of the nativity crib. There is still the chestnut seller with a brazier and equipment for preparing mouthwatering and fragrant roast chestnuts, the cheese vendor with cheeses in the typical forms of our oldest recipes who continues the tradition still today; there is the cantina, with its scattering of kegs and vats; there are typical hostelries of rustic simplicity, with an abundant display of foods to tempt customers to the pleasures of the palate and remind us of our hillside trattorias. They are vivid, complex scenes, with precise details, in which each figure is illustrated as engrossed in his or her activity, professional or domestic.

Every corner is a glimpse of life experience, in which a very fine line is drawn between invention and reality. There is always the inclusion of a part of our home territory, recalling the uniqueness of the places and typical traits of the landscape. Imagine the beach with a fisherman intent on repairing his nets, beside a boat. Or the orange groves with the once so traditional pagliarelle protecting the fruit from the excesses of weather in our local countryside; or the houses with domed roofs, once so common a feature of homes on the Sorrento peninsula; there is the ancient gate of Sorrento which today lives on only in the dusty pages of a book on local history.

A special comment is warranted for the clothing of the figures. Sumptuous in their 18th century pomp those of the rich and noble; of dignified poverty those of the country folk, to mark the class difference, founded on the census, between rich and poor, noble and commoner. Nevertheless, in respect of local custom, the Sorrentine shepherds are dressed in linen shirts, silk waistcoat with metal buttons and knee-length, snug-fitting trousers in green satin. At his waist a multicoloured silk scarf, white hose, low-cut leather shoes with a metal buckle, and a beret perched on his head. The same clothing that we still find today in the costumes of Sorrentine Tarantella dancers!

Of course much remains secret, but with plenty of implicit allusions. Certainly, the nativity crib offers itself as a departure point from which to observe the progress of our society which from its agricultural-pastoral origins has, a little at a time, undergone those transits and transformations that led to the modern industrial society and which, if this has cancelled traits that we still cherish as symbols of a long-lost Arcadia, has also rendered possible a fairer and more egalitarian society in all its expressions. In the nativity crib, therefore, man always plays the leading role in his destiny in the world, heir, however, to that ethical and moral revolution that begins with the true Nativity, whereupon pagan society is overtaken by Christian, ours that is, the society we live in now.