Popular Tradition in the Gulf Islands 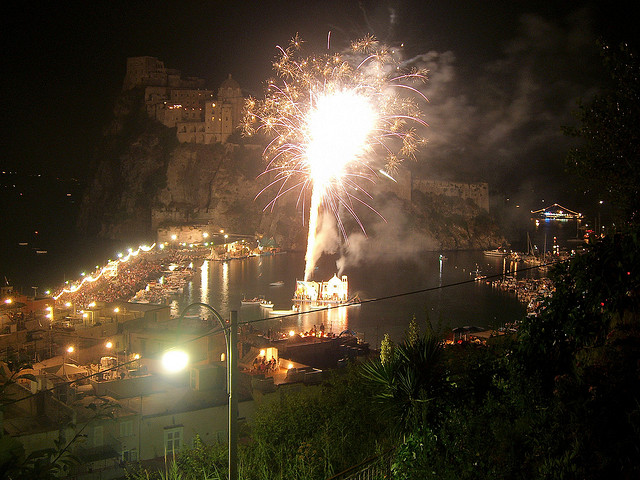 The territory of these three islands is the richest in legends, and secrets linked to art. The same islands birth is linked to a myth, and still today, it is possible to meet old depositaries of a knowledge any book could never tell. Religious parties, processions, pyrotechnic shows and particular dances, legends and handicraft traditions, things to be saught in past centuries and to relive in the three islands of the Gulf in every period of the year, beginning from Procida where parties are mainly celebrated during Easter period, beginning from the Thursday before Easter, with the hooded apostles’ procession. The party is organized every year by the brotherhood of the whites or the ss. Sacrament, the most ancient of the island. On Friday, early in the morning, the procession leaves from Terra Murata, with religious wagons, statues and with the “paputi” of the turchinis’s congregate, men dressed in white with the blue mozzetta. Children are dressed-up like angels, with suits in black and gold. There is another big celebration also for San Michele Patrono dell’Isola and for the Madonna del Carmine.Two statues of this Madonna are guarded in the abbey of San Michele, respectively of the XVIIth and of the XIXth century. Starting from the 15th of July, the seventeenth-century statue is dressed by islanders women with suits made of gold threads and then exposed on the altar, in order to be carried to the church of Santa Maria dei pescatori, after two masses celebrated in her honor. There it will stay for a week, before returning to the abbey. But another tradition is also celebrating two important writers who have wrote about Procida in their pages: Elsa Morante, with its Arthur’s Island, a book whom it was dedicated a literary competition that is held on September for the most poethic and narrative text, and De Lamartine, author of Graziella, celebrated during the Graziella Party, which should occur the first week of August, within the Festa del Mare. In memory of this literary place, during an eighteenth-century procidan costume parade, the most beautiful girl is elected the Graziella of the year. From one party to another you can’t miss a tour among the characteristic shops of Procida, from Corricella, where is possible to find painted handicraft ceramics, as well as buying typical procidane cottages with pastel colors, and many characteristic handmade objects.

There are also many other shops where, it is possible to assist to the sweet-boxes making, or home objects, or attending to one of the practical courses artisans held there. August the 26th Ischia Harbour is celebrated Sant’Alessandro with a representation of the whole island history with genuine costumes of the epoch and accompanied by flag shakers. Ischia Harbour is also the location of the famous International Journalism Award, Ischia Award. Among the winners of this award there are the most important names of the Italian journalism, from Indro Montanelli to Alberto Bevilacqua. On September, at Ischia Ponte, there is the celebration of the Santo Patrono Giovanni Giuseppe della Croce. During the celebration there is the procession of the statue brought away by the sea, from Ponte to Porto, then returning later on to the earth. At the end of the procession there are also fireworks.

The most famous Ischia feast is a very big tradition, a feast taking place on the 26th of July, in honor of sant’Anna, the fishermen’s protectress. On the scenery of the enchanting natural amphitheater, in front of the suggestive Aragonese Castle, tourists will participate to the characteristic parade of wagons built on floating floats, ending with the classic fire of the Castle and of the Michelangelo Tower.

According to Casamicciola legends, its name derives from a Roman matron, “Nizzola”, who not being able to walk anymore, owing to the pains she had in her legs, she completely recovered herself by putting her legs in the waters of a brook, near her residence. From then this area was named “Casa di Zizzola”, and then it became famous for thermal therapies. This tradition seems to be confirmed by the city hall coat of arms, showing a woman bathing her legs in a spring. Another tradition is linked to thermal waters benefitc. It is said that near Castiglione thermal spring, it is possible to have a healthy bath near the Bagnitiello, where somebody says that waters can give fertility to women. Popular cult or truth?… Go and trust it. From Casamicciola let’s pass to “that small mushroom” of Lacco Ameno, famous all over the world thanks to Angelo Rizzoli, in order to remember from the 16th to the 18th of May Santa Restituta’s sacrifice. It’s said that this blessed woman, of Carthaginian origin, didn’t want to abjure her own Christian religious persuasions before Proclino tyrant, who condemned her for this reason to get burnt alive on a boat pushed in the sea. For divine wish, however, she could escape to the fire and landed on San Montano’s roadstead.

In Forio, leaning from the extraordinary viewpoint on the terrace in front of the church of Santa Maria del Soccorso, it is possible to admire the famous Raggio Verde, an optic phenomenon caused by the fusion of the last sun rays of the day with the color of the sea, which according to the popular tradition, brings much luck if you get “kissed”. Also the country civilization tradition is very rooted. The party of lunedi in Albis is famous: the Corsa dell’ Angelo and the ‘ndrezzata, popular dance, during which dancers dressed with typical costumes, of white red and green, make some “mazzarielli” and wood swords rotate in the air, at the rhythm of popular music. This dance was born during propitiatory rites that farmers made for “fertility”, and also in Barano this is a common rite, but in this place the dance can also take place on June the 23rd and the 24th, near the church of San Giovanni in Buonopane, worthy to be visited. The “working dance” called “u punton”, has different origins, since it is linked to a daily building job island houses, and it mimes movements and rhythms of thaose building jobs.

… What about the craftsmanship? In these places art is also represented in small things: like vases painted with vivacious colors, hand woven wacker baskets, delicate embroideries and the most ancient art of ceramics. Wise artisans are the depositaries of workmanship ancient techniques, they are devoted to clay mixing, moulding those primordial elements that give life to things: water, earth, and air. What happens then? The last touch is given by fire, which helps producing objects that seem immortal, and that leave people thrilled, for the wonderful and inimitable decorations recalling sea, earth, and Ischia sky warm colours.

In order to participate lively in the making of one of these creations, there are many historical shops to be visited, and some of them have a very ancient history. Inside some of these shops there are also workshops, where you can find anything, from an endless pitchers range to sacred iconografies made by local “madonnari” (painters who only represent the Madonna) to the products of the shops of the Earth of the Fire, edge of heaven perpendicularly to Citara.

In Ischia there is the living Neapolitan manger tradition, as shown from the so many shops producing the refined shepherds’ cloathes.

The tour continues at Capri. The island protector, San Costanzo, is landed on Capri coming from the sea. The Saint’s relics are kept in the basilica Capri islanders dedicated to him, and every year an ancient tabernacle is exposed in the basilica, to allow believers worshipping it. Walking though the island alleys, old islanders will tell you the story about Spadaro, who became famous because he was the first one to climb the steep rocky wall of one of Capri stacks. If you are interested in knowing more about Capri history and traditions, we suggest you to lead tourists to the island books shops, where there is plenty of ancient or unpublished texts, presses, lithographies and epoch paintings.

Capri is also famous for the ancient perfumes manifacturing. The legend tells that on 1380 the prior father of the San Giacomo Chartreuse, who didn’t know anything about the arrival of the sovereign Giovanna D’Angio’, decided to pick-up for her the most beautiful flowers of the island.

Those flowers remained three days in the same water and when the prior had to throw the flowers away, he suddenly realized that water had acquired an unkown fragrance. Consequently he decide to refer to the religious man, who was an alchemy erudite, and this man said that the fragrance originated from the “Garofilum Woodland Caprese” That very water was the first Capri perfume.

Some demonstrations are finally suggested, such as for example: the Capri Summer festival, from May till July. This is an important organist and chamber music review that is held in the Cathedral of Santo Stefano, in the church of San Giacomo Chartreuse, and in the hotel of Quisisana theatre. The Capri Chartreuse Review is held during July and August, with theater performances. In September, the wonderful music and cabaret shows are performed inside the fantastic Chartreuse, during the demonstration September in Capri. The literary Prize of Curzio Malaparte, one of the most independent Italian writers of the XXth century, ends-up the yearly cultural demonstrations, together with Capri Hollywood, the movies world preview.