Memories of Christmas Past 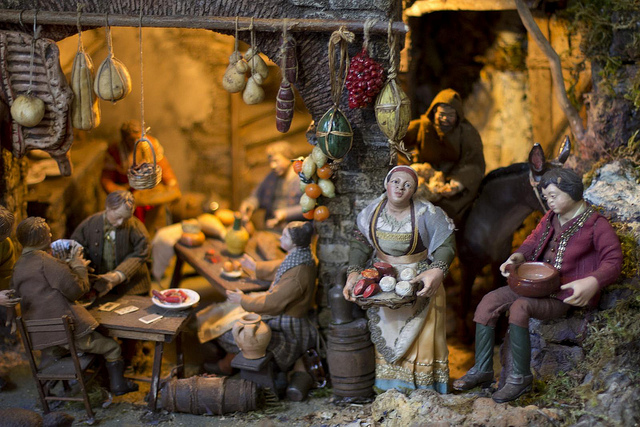 To keep and to hand down old customs and traditions offers man a rich and inalienable treasure because they become a significant part of his culture. It is through memories that we rediscover and, not uncommonly, regret the passing of times gone by. Christmas traditions are certainly those that remain impressed on our memory because they allow us to relive so many lovely occasions: the warmth of the family, Christmas preparations with their rituals and celebrations: the nativity crib, the tree with its lights and decorations, gifts to be given and received, and those never-ending games of cards or tombola, lucky one minute, on a losing streak the next, during the long afternoons or evenings. We remember how Sorrento was decorated for the occasion. Illuminations everywhere, shops filled to overflowing with all things wonderful, the noisy and happy coming and going of people busy with Christmas shopping, whilst in the distance the notes of the shawms and bagpipes of the zampognari announcing the ‘novena’ to Baby Jesus; or the spluttering of the tracchi and bengala firecrackers, filling the air with their unmistakeable lingering odour of sulphur.

Christmas was a long festive period that already began in mid month, the festival of Santa Lucia on the 13th, starting work on the nativity crib which, tradition says, had to use fig branches for the framework, covered with newspaper, set with glue and then painted. Then the crib figurines were added, in clay or papier mâchè, to animate the scene.

A day of sheer bliss was Christmas Eve. Preparations for Christmas Eve dinner started early in the day. Zeppole and struffoli were the first worry for every mother, because they require a lot of preparation time and careful attention, especially the boiled zeppole, dangerous when they were later deep-fried because they could easily “explode”.

Via San Cesareo was an unending display itself, the street where the grocers, fruit sellers, butchers, fishmongers and bakeries were concentrated. It was a triumph of colours and aromas. Every shop competed with the next to display its wares with a fascinating scenography: cascades of fruit and vegetables adorned the fruit sellers’; the butchers displayed whole sides of beef, pig’s heads with a sweet-smelling lemon in their mouths, plus free range chickens and goats; the fishmongers flaunted every kind of fish, shellfish, mussels, clams, but especially the “capitoni” (eels) wriggling in tanks full of water. The sales pitch of zì’Ntunino, zì Monaco, the Ferola family and ‘Nduluniello lacerated the air, an invitation to buy sea bream or gilthead, clams and mussels. It seems you can still hear the echo of their calls. Not to mention, then, the bakeries who filled their windows with marzipans, rococò, susamielli, cassata, mustaccioli, Christmas logs, panettone.

Liqueurs and spumante were mere decoration.

Those who pass along this street nowadays will find it more a bazaar or Arab soukh due to the near total mutation of the goods on offer (leather goods and shoddy wares that have managed to oust out even the Sorrentine inlaid woodwork, a historic traditional handicraft, typical of Sorrento, now in severe crisis). O tempora, o mores, the ancient Romans would cry. It’s the way of the world.

The memories of the religious functions pass before our eyes like film shots because, let us not forget, Christmas is above all, a religious festival. Midnight mass in the Cathedral and the procession of Baby Jesus through the streets of Sorrento, accompanied by a hymn composed by St. Alfonso and by the deafening crack of fireworks.

Whoever, today, would like to discover that atmosphere would remain disappointed. Times have changed, the interest and worries of men are different.

Nevertheless, the Sorrentine Christmas does make an attempt to be like it once was, also because in the south traditional ties are stronger and we do everything we can to relive certain atmospheres with events as faithful as possible to those of times gone by. It is certain that we will no longer find the human element, those men, most of whom are no longer with us, the main characters of that beautiful fairy-tale that was called Christmas.