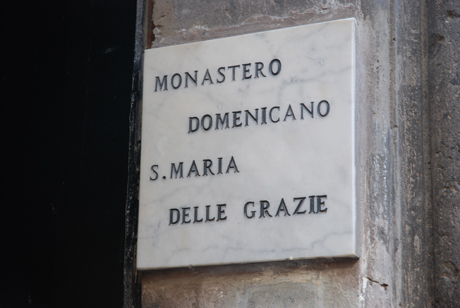 Built near a women’s monastery of seclusion, the beautiful Sorrento church was built according to a local noble’s will. Inside it there is a statue of the Christ making miracles and various works by Silvestro Buono Junior.

The Church of Santa Maria delle Grazie in Sorrento (which lies right in the old town centre of Tasso’s hometown, a stone’s throw from Sant’Antonino Square, along Via Santa Maria delle Grazie) was built around 1556, according to the will of a noble woman from Sorrento, Bernardina Donnorso, close to the homonymous women’s monastery of seclusion.

Inside it, the Sorrento Church is characterized by the presence of various pictures by Silvestro Buono Junior, like the one above the high altar depicting the Madonna delle Grazie, from which the church itself takes its name.

By the same author are also the portraits of Sant’Antonino, Bishop of Florence and San Vincenzo Ferreri, situated in a side position.

In entering the church, on the right-hand side, we can appreciate the images of Saint Dominick and of the Madonna of the Rosary whilst, on the left-hand side, there are the pictures representing Saint Thomas of Aquinas with the Christ Crucified talking to him, and the Madonna’s Visit to Saint Elizabeth.

Finely furnished with magnificent polychrome marbles which make the altars particularly precious, the Sorrento church has a wonderful majolica floor, recently restored, thanks to which it is still possible to appreciate the beauty of the typical drawings of Neapolitan master tillers, who were real experts in this field.

Along the nave, then, we can also note numerous gratings (also called ”gelosie”), in inlaid and decorated wood, which were made at the end of the 16th century.

These were made to allow the nuns of the monastery of seclusion to take part to masses without being seen.

At the end of the right-hand side wall, moreover, there is – inside a niche – a beautiful statue of the Christ crowned with thorns.

To this statue itself a lot of miracles are attributed.

According to tradition, in fact, both in 1720 and in 1858, this statue oozed with blood from its left leg. The nuns present at the prodigious events soaked up this blood with linen clothes which were jealously kept.

Those who wish to have further information about the Sorrento religious building can buy, at the sacristy, the booklet entitled “The Dominican Church of Santa Maria delle Grazie in Sorrento”.