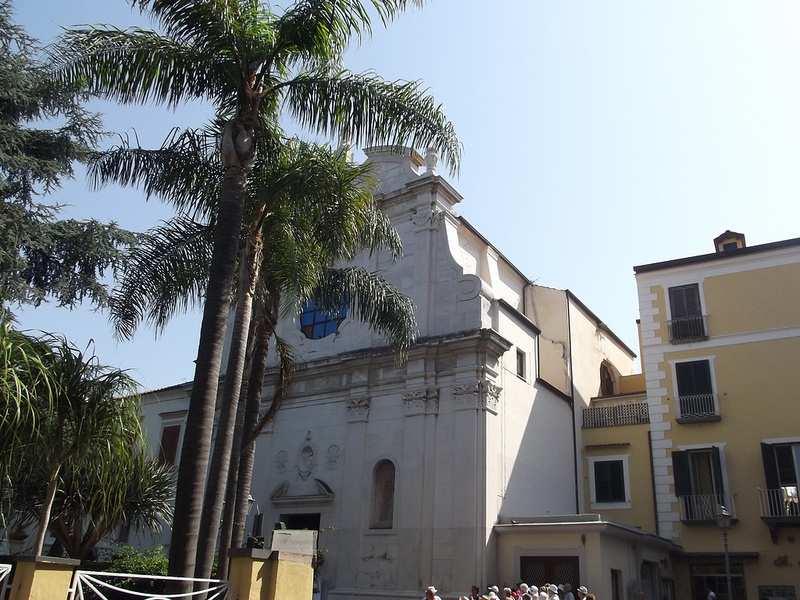 In the Sorrento church, rich in history, a picture representing the pregnant Magdalene. The religious building lies next to the Public Gardens of Sorrento and is part of the wonderful 14th-century cloister.

Close to the Public Gardens of Sorrento which offers some splendid sights of the Gulf of Naples and one of the most suggestive viewpoints of Sorrento, there is the Church of San Francesco.

The original church probably goes back to 14th century, as it is also proved by the wonderful Sorrento cloister next to it which is still kept almost unimpaired in its 14th-century style.

The Church of San Francesco we can admire today is nevertheless very different, because subjected to numerous renovation and reconstruction interventions, like the ones concerning the marble façade going back to 1926.

Above the high altar we can appreciate a painting of 1735 which depicts St. Francis while receiving the stigmata.

At the end of the left aisle, instead, the presence of a wooden crucifix placed upon a painting representing the Madonna and the pregnant Magdalene is astonishing. Though being of the 18th century, the work fosters the curiosity of those keen on plots and the more or less fantastic hypotheses contained in the “Da Vinci Code” by Dan Brown.

In the sacristy, various marble finds of different times are kept, while in the Sorrento franciscan friars’ reception room we can admire a magnificent painting of 1500 representing a Madonna with the Infant Jesus between Saint Michael Archangel and Saint John the Baptist, attributed to Friar Joannes Baptista.

Very ancient, finally, is the wooden portal, of the 16th century, too, which has been recently restored.

The Cloister of San Francesco next to it, besides its beauty, is dear to a greater and greater number of foreigners who – as well as Italians – address to the municipality of Sorrento to celebrate their own civil wedding in Sorrento.

Also for this reason, while walking on the area, it is not difficult to meet with a married couple.

Those who wish to have further information about the Church and the Cloister of San Francesco can buy the book entitled “The conventual complex of San Francesco in Sorrento”, edited by Annunziata Berrino, published by the Eidos.