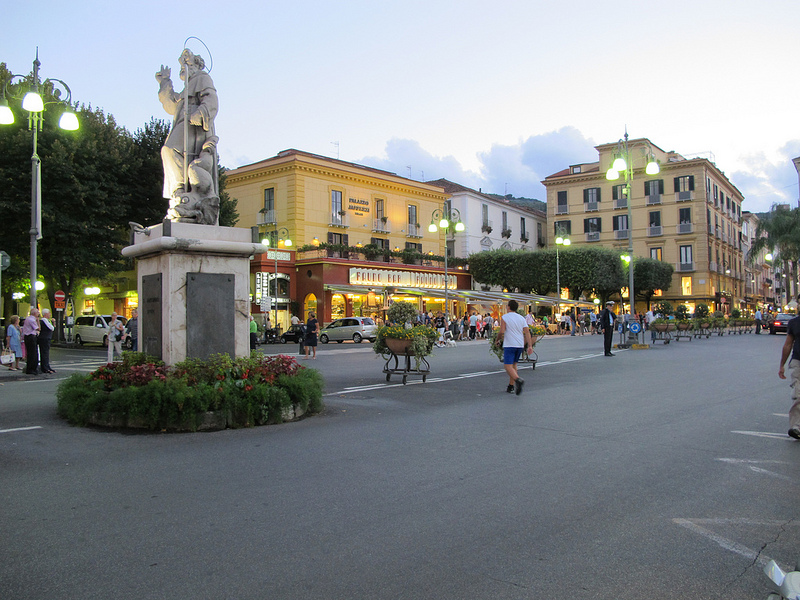 Sorrento is located on a tuff coast and is reflected in the Gulf of Naples, fascinating tourists and visitors, attracted by breathtaking views and landscapes. The town gives its name to the Sorrento Peninsula, a large area extended from Vico Equense to Massa Lubrense. This area, thanks to its geographical shape, suspended between the green hills and the blue of the seas, has always been a great attraction in the South of Italy. With its almost twelve thousands accommodations in over 150 accommodation facilities and over ten extra accommodations – among which campsites, bed & breakfasts, residences, hostels, holiday villages and about thirty farm holidays – the Sorrento Coast is one of the most popular destinations of the entire Campania region. It is also the ideal destination for Italian visitors and foreign tourists, that want to plan excursions to Capri, Ischia, Pompeii, Amalfi, Positano, Ercolano, Paestum and Vesuvius, places located at a distance of 50 Kilometres. Sorrento was first a Phoenician colony , after that it became a port frequented by Greeks for the commercial activity with Naples and with other southern cities. It was named by Greeks “Syrenusion” or “Syreon”, that means Siren’s land; the Sirens were the mythological creatures, half woman and half fish, Homer talked about in his famous work “Odyssey”. These creatures could fascinate sailors with their songs .

After the rule of Oscans and Sannites it was submitted by Romans. The Romans appreciated the beauties of this place so much that during the imperial period it was elected a holiday destination of patricians, as the numerous villas attest. It was the native country of Torquato Tasso. For so long Sorrento has exercised a particular charm which has attracted poets and literary men like Goethe, Lamartine, Stendhal, De Bouchard, Byron, D’Annunzio, Ibsen, Douglas, musicians like Rossini, Liszt, Mendelssohn, Wagner, painters like Pinelli, Fernet, Lindstrom, photographers like De Luca and the brothers Alinari, film directors like De Sica, Gallone and Mastronardo. Among the famous visitors of Sorrento we can remember also Enrico Caruso, Giacomo Casanova, Scipione Breislak, Marion Crawford, Charles Dickens, Herman Melville, Friedtich Nietzsche ed Axel Munthe. This coast town was included in the eighteenth-century among the main destinations of the Ground Tour and among the most significant Italian cities, visited by foreign intellectuals who wanted to study in depth the Italian history, art and culture.

NOT TO BE MISSED

Basilica of Sant’ Antonino. It was dedicated to the Patron Saint and was built with a typical basilica structure, with a nave and two aisles around the year 1000, then it was restored and rebuilt between the XVIII and the XIX centuries. The structure preserves, by the way, paintings of 1600, fragments of an ancient majolica tiled floor and a remarkable example of Neapolitan crib of 1700, which was attributed to the students of the Sammartino School with statues which were dressed up with clothes realized with precious fabrics and enriched with precious laces. In a crypt below Sant’ Antonino’ s grave is located . He was born in Campagna, a town near Salerno, he came to Sorrento after a period in which he lived between Castellammare di Stabia and Faito Mount died on February 15th 471. Among the miracles which were attributed to him, it’s important to remember when he saved a child who was swallowed by a whale. This fact explains the presence of two cetacean bones in the hall of the basilica. There was a deep bond between the Saint and the sea and its inhabitants as the collection of ex votos given to the church by sailors who escaped shipwrecks attests .

Cathedral. In Sorrento Cathedral there are so many examples of the local art, famous all over Italy: the inlaid woodworks . The cathedral of the town overlooks the street Corso Italia and it’s adorned with furnishings realized with ancient techniques of inlaid woodwork. It was built at the beginning of the fifteenth century in a romantic style and later it was restored several times until the restoration of 1924 during which its front was rebuilt entirely . The church, in addition to the baptistery where Torquato Tasso was baptized , maybe the most famous citizen of the town, contains a great number of paintings of the Neapolitan School of the eighteenth century and is characterized also by a grand bell tower.

Sedil Dominova. It is a refined monument, built around 1450 and perfectly preserved, it is the ideal place wherethe representatives of the local nobles met to discuss about matters related to the political and administrative life of the city. The only evidence in the whole region of Campania of the ancient aristocratic meeting point is that one of Dominova with an open loggia, surmounted by arches with a square base and that is closed on the two sides by two balustrades and a majolica tiled dome of the seventeenth century. Very interesting are the frescos of the seventeenth century which represent the architectonic perspectives. The inner small lounge preserved the marble inscriptions that now are at theCorreale di Terranova Museum in Sorrento. In the area opposite Sedile Dominova there was once a small fountain. From this fountain the name “ Schizzariello”, meaning a small squirt of water, was given to the square

San Francesco convent. San Francesco convent is formed by three buildings: the church, the convent and the very famous cloister. The church was built in the XVI century in Baroque style, but with a front in white marble that was built in 1926. It preserves important works as the wood main door, representing the Saint with the Crucified. Another statue of the saint, in bronze, and in a modern style, realized in 1922 by the sculptor Alfiero Nena, is visible in the square, opposite the church. Next to the church there’s the splendid cloister of the fourteenth century that was found in the VII century and that today is still inhabited by Franciscan friars.

The building has a rich variety of architectonic styles mixed together to form one work, an ideal setting of art exhibitions, festivals, concerts and events.

Marina Grande. You can reach this place trough a road that goes downhill, with large steps. This road has origin from the end of the street “Sopra le Mura”. After few steps you reach the gate of Marina Grande which preserves, despite its successive restorations, the typical Greek structure and it’s dated around the IV century B.C. From this gate the Turkish pirates entered and sacked Sorrento in 1558. Going beyond this gate you are behind a typical fishing village, represented by a fusion between the Moorish architecture and the real local style. From this combination architectonic forms arise , bizarre and picturesque like the houses, built in the tuff cliff and that are still inhabited. Here the Church of Sant’Anna, the patron saint of the village, also arises ; it was built at the end of the seventeenth century and later extended. On this beach, in a shipyard under the open sky the famous “Sorrento fishing boats” were built, a typical wooden boat with a sail; these boats were from 6 to 12 meters long , easy to handle, reliable and unsinkable. The mastery skill of Sorrento artisans was so great that the fishing boats were used by the fishermen of the Gulf of Naples and of the islands. Heirs of this tradition are the fishing motor boat that are built still today in Sorrento and its surroundings.

Correale Museum. The museum was put up by a private institution and wanted by the brothers Alfredo and Pompeo Correale, counts of Terranova, the last descendants of an old and aristocratic family of Sorrento. In their will they provided that the palace and their art collections, preserved in the villa Correale, constituted a museum entitled with their name. Walking along the rooms of this splendid residence you can admire precious furniture, refined European and eastern porcelains and rare Neapolitan and foreign paintings. The building is distributed on three floors, with a total of twenty-four rooms and the loft that is used as an expository space. The art collections of the Correale museum present a wide range of Neapolitan paintings and decorative art from XVI to XIX century and of foreign paintings. It also preserves an interesting collection of European clocks and one of the most prestigious collections of Chinese, European and Neapolitan porcelains of the XVIII century. For further information call 0818781846.

The museum –workshop of Wood intarsia. It is located in the old town, in an eighteenth- century building. The museum presents, in the room with fresco vaults and with the ceilings faced with hand- painted wallpapers, a selected and rich collection of furniture and objects made by the inlayer masters of Sorrento during the whole XIX century. The display highlights technical and decorative aspects of the single schools and artisan workshops. The adjacent display of paintings of Italian and foreign artists, of vintage photos and prints, allows to reconstruct the nineteenth- century image of the Sorrento Coast and of the historical and environmental context in which the local production of intarsia developed. The progress of the manufacture techniques, the documentation of the used materials, the study of decorative themes and of the planning details value the design of the intarsia products and offer the occasion for many other sections. Information at 0818771942.

Sorrento Cape. This locality, halfway between Sorrento and Massa Lubrense, reachable also by bus, contains the Regina Giovanna Beaches and the archaeological site of the villa of Pollio Felice. To reach this area you have to go along a narrow street, shaded by olive and orange trees, with the walls covered by ivy, which goes down along the ramp degrading to the sea. The cliff is dedicated to the queen Giovanna Durazzo d’Angiò, who , according to a legend, came to lower herself into this sheet of sea. All the space behind the top of the mountain is occupied by remains of a great Roman villa, that belonged maybe to the patrician Pollio Felice, built at the time of emperor Domiziano (81-96 A.D.) and was also sung by the Latin poet Stazio in his poem “Silvae”. Going on you can reach the “Solara”, an expanse of cliffs corroded by the sun, a summer destination of hundreds of bathers.

Marina Puolo. It is a suggestive seaside village, which counts today about 150 inhabitants and a territory divided between Sorrento and Massa Lubrense. Its story is that one of the old fishermen, that were busy repairing nets and inquiring that sheet of the sea, part of the nature reserve of Punta Campanella, a protected area of notable importance for its biodiversity. In the village, located behind the large beach, there is an old watchtower of pirates. The name “Puolo” derives from a distortion of the Latin Pollius, name of the Roman patrician Pollius Felix, owner of a majestic villa, which stood very close. Puolo area is involved with a recovery and protection project concerning the tourist business. This project has been made and continued by an association constituted among the inhabitants of the village.