Discover the Bay of Jeranto 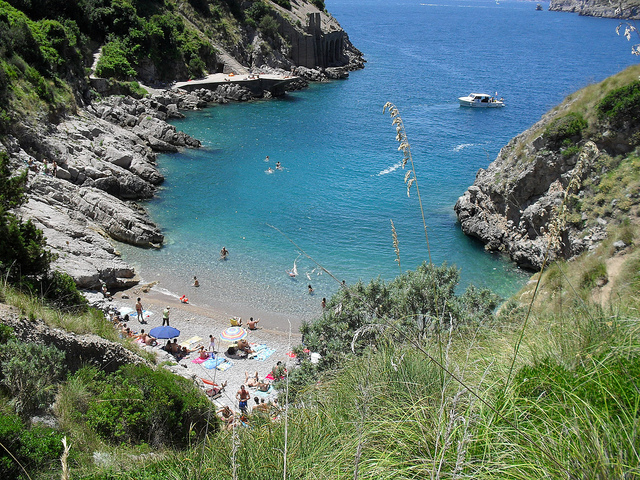 In spring and summer, when nature paints the sky and sea with a thousand colours, and extends her green mantle across trees and fields, we can let ourselves be guided along the numerous intertwining pathways of our peninsula, to discover the hidden sinuous recesses and uncontaminated nature.

The itinerary I suggest in this period, before the searing summer sun renders it impracticable, is that from the square in Nerano to the Bay of Ieranto.

On reaching the square in Nerano – which is possible from Sorrento by SITA bus – our itinerary of extraordinary landscape interest commences. To the right, marked in red and white, the entrance to the path leading to the Bay.

The route is not one of the simplest, but the outstanding beauty of the landscape which, as we progress, slopes down towards the sea until it forms the Bay, and the unbelievable variety of plants and flowers render this one of the most beautiful walking itineraries of our peninsula.

Following narrow paths blended with series of steps, the olive groves that we find on the first section of the path make way for a more scarce vegetation, as the horizon is gradually silhouetted by the profile of the sea; then, slowly, the land becomes colourful again, bedecked in flowers and plants that burst into life on the limestone rock.

At a certain point, breaking the horizon between sky and sea, the contour of a king gull or peregrine falcon, elegantly soaring above the Torre di Montalto. A Tower that has observed for centuries, in silence, the Bay of Ieranto … it is one of the many watchtowers dotted along the coastline, a memory of olden days, when the seas were home to Saracen pirates that made our coasts quake with violent raids.

On reaching the Bay we can admire an enchanting spectacle, leaving behind us the white rocks that capture and reflect the rays of sun, our senses marvel before an incredibly limpid sea blended with a clear sky and, if we are lucky enough to arrive as the sun hides below the waters it is possible to immortalize, in our own minds, a spectacular sunset: a perfect fusion of limpid sea, transparent sky and the fiery red of the sun, and we can perceive, irresistibly, the pure magic of nature…