The charm and fascination of tradition in Marina Grande 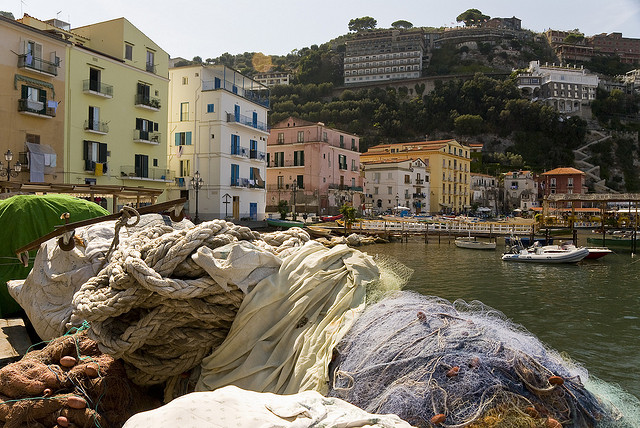 In summer, when the sun lingers longer before surrendering its place to the moon, there is nothing more pleasant than to wander through the Marina Grande fishing village; especially if the path allows you to merge into this timeless world with its own pace and traditions. It seems almost to be a small universe of its own, not easily allowing itself to be touched by the often frenetic development animating nearby areas. Here life has its own rhythm, the strongly united community tenaciously anchored to its family principles and working and religious traditions; it loves the sea and lives in symbiosis with it, here time seems to … move more slowly than anywhere else!

This characteristic fishing village lies at the mouth of the valley which once closed, to the west, the old town; above, it was crossed by the Parsano bridge, where Via Minerva commenced and led to the temple dedicated to the goddess Athena located at Punta Campanella. A long series of stone steps of a mediaeval flavour links the old centre of Sorrento with Marina Grande. At the end of the steps is the arch of the charming Marina Grande Gate, dated to the end of the XV century, the only means of access to the town from the sea. Time has covetously maintained most of the aspects of the old Greek gate and the walls that lines the path to the gate.

Tradition relates that on 13 June 1558, the Turks entered and plundered the town of Sorrento by passing through the Marina Grande gate, opened – in secret – by a slave of the Correale family. After the Saracens left, the inhabitants constructed a solid town wall, and the gate was restored and incorporated into the wall.

Walking along Via Marina Grande, we meet an old villa overlooking the sea, “Villa Tritone”, surrounded by a garden rich in extraordinary exotic plants. Constructed close to an old convent, it owes its fame – apart from to its position and undeniable beauty – to a sojourn there by Benedetto Croce who, during the 1942 bombardments, found refuge in this small paradise and met many political characters here, such as Togliatti, De Nicola, King Umberto of Savoy and General Clark. A commemorative stone near the main entrance informs passers-by that Croce once stayed there.

On reaching the end of the path, the eyes of the traveller are presented with an extraordinarily beautiful canvas, almost from times gone by: a tiny bay nestling a delightful and characteristic fishing village, a narrow beach and bathing establishments … this is Marina Grande. Here the beach is common ground, used for both work and free time for the entire community. Passing through, it is possible to meet the fishermen sitting in the shade of the boats hauled up to the beach, repairing – by hand – their nets and telling stories, to the children and curious visitors, of fantastic adventures of the courageous seamen, stories handed down by their grandfathers in a longstanding oral tradition.

On this beach, in an open air dockyard, the famous “gozzi sorrentini” were produced, wooden sailboats, easy to handle and reliable, created by real artists and maestros of wood craft, and adopted by fishermen across the entire gulf.

At the heart of the Marina is the Church of Sant’Anna, patron saint of the village, constructed by the fishermen of the San Giovanni in Fontibus Brotherhood, at first dedicated to the souls in purgatory and then to St. Anne. On the Sunday following 26 July – day dedicated to the saint – the village is decorated in festive mood, the bay fills with boats and the sea is illuminated by highly colourful fireworks.

Traditionally the festival had a pagan flavour, with fireworks from the sea and boats arriving in Marina Grande from nearby harbours, bringing typical products; the fiesta ended with music and dancing on the beach, continuing throughout the night.

Nowadays Marina Grande covetously preserves the flavour of olden day traditions blending, in delightful union, with the sea breeze … tiny houses, traditional boats and charming small restaurants by the sea, fitting into the tissue of the harbour without modifying its original vocation as a fishing village. A step back in time, to discover the forgotten traditions and flavours, and to admire, relaxing on the sand, a sunset rich in sheer magic.