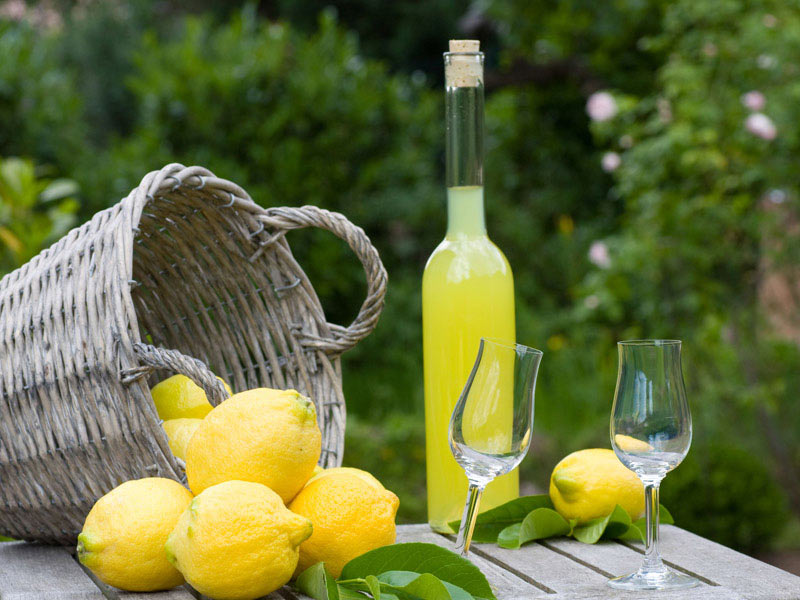 Recipe of Limoncello – The original from Sorrento Coast

The king of the original recipe of Limoncello is the yellow and wrinkled lemon skin. This is how limoncello is born, from a sober and genuine recipe, enriched by water, alcohol and spoons of sugar.

The preparation is easy but meticulous: if executed with accuracy, in a bit less than three months, the traditional yellow liquor will be ready to taste as an aperitif or digestive, before or after meals.

The history of the original recipe of limoncello bends through a series of anecdotes and legends. Its paternity is competed by Sorrentini, Amalfitani and Capresi. In small plots of kilometres, three populations boast of a production of limoncello passed on by various generations. In Capri, someone says that its origins are linked to the events of the family of the businessman Massimo Canale who, in 1988, registered the first trademark “Limoncello”.

The liquor was born at the beginning of 1900, in a small boarding house of the island Azzurra, where the lady Maria Antonia Farace took care of a rigorous garden of lemons and oranges. The nephew, during the post-war period, opened a bar near Alex Munte’s villa. The speciality of that bar was the lemon liquor made with nonna’s old recipe.

In 1988, the son Massimo Canale started a small handmade production of limoncello, registering the trademark. But really, Sorrento and Amalfi have some legends and stories on the production of the traditional yellow liquor.

On the coastal, for example, the story narrates that the big families of Sorrento, at the beginning of 1900, would always ensure that their illustrious guests would get a taste of limoncello, made according to the traditional recipe.

In Amalfi, there’s even who believes that the liquor has older origins, almost linked to the lemon cultivation. However, as it frequently happens in these circumstances, the truth is vague and the hypothesis are many and interesting.

Someone believes that limoncello was used in the morning by fishermen and countrymen to fight the cold, since the invasion periods. Others, instead, believe that the recipe was born inside a monastic convent to delight the monks from prayer to prayer. Maybe, we’ll never know the truth, except for the fact that the traditional yellow liquor has crossed the borders from decades, conquering the markets of half world. Bottles of limoncello are present on the shelves of overseas’ markets, and new important commercial sceneries are developing on the Asian markets.

So, limoncello, could really become a worldwide product like Bitter or Amaretto. And in order to defend itself from the imitations, it is run also to the shelters, reserving to the production of the characteristic “oval” sorrentino the denomination of geographic Indication protect (IGP).

The original lemon of Sorrento has to be produced in one of the town council of the territory that goes from Vico Equense to Massa Lubrense and the island of Capri.

The cultivation system is the typical and traditionally adopted in the area. The most used technique consists in cultivating the plants under a structure made out of chestnut poles higher than three metres. To ensure the ripeness of the fruits, the trunk is protected from the atmospheric conditions.

The harvest is usually carried out during the period from February to October: it’s hand done, because the direct contact of the lemons with the ground has to be prevented.

The main characteristics of the product go searched in the elliptic and symmetrical shape, in the medium-large dimensions, the colour of the yellow peel citron. And the main ingredient of the recipe of limoncello is just the peel: the rind is in fact rich of essential oils and has an aroma much deciding.

Once assessed the origin sorrentina of the lemon, can finally be proceeded to the preparation of the liqueur. With little healthy ingredients, the limoncello it can comfortably be prepared also from home. It takes around eighty days. In fact, according to the traditional prescription, limoncello must macerate more than two months. 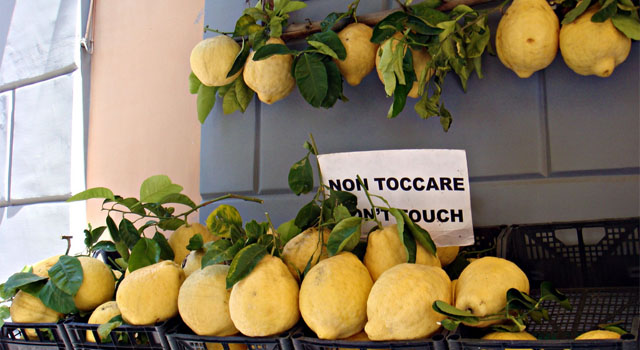 In the choice of the lemons, those with much thicker peel are preferred. Just the Mediterranean climate of the Sorrento – Amalfi coast guarantees the increase of a lemon with large and perfumed peel.

The first step of the recipe of Limoncello previews the washing of the fruit in warm water and the brush in order to clean it from eventual residual of insecticides. Alcohol is poured in a water jug, and are then added pieces of aromatic rind gained from the peel.

The experts advise the use of good quality alcohol, also to avoid that the liqueur is transformed in ice in the freezer. With the arrangement of the water jug covered in a dark room or in a sideboard, the first phase of production is concluded. At environment temperature, in fact, the maceration of the peel will continue and the instilled will slowly assume the aroma and the yellow of the lemon.

After approximately a month of rest, the preparation continues with the adding of a small pot of water and sugar (boiled and then left to cool down) and other alcohol. The water jug goes then newly covered and put away in the cabinet for an other abundant month.

After forty days approximately, the instilled goes filtered in the bottles, discarding the peels. Then the bottles go in the freezer. From the unique taste and the aroma form, the liqueur goes therefore served, without the additives and colouring agents.

Limoncello is an excellent digestive if served cold. Someone prefers it to environment temperature, even stirred in tonic water or champagne. Lately, it is in vogue its utilisation on gelatos and fruit salad. In Campania, in the earth prince of its production, limoncello concludes above all lunch or supper: at this point it has become a social ritual nearly at the same height coffee.